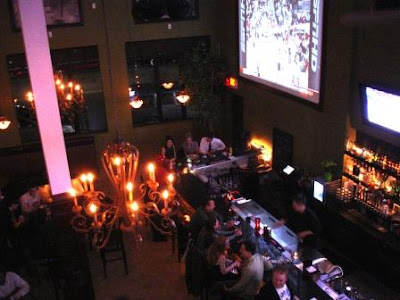 Our little Bookies is all growed up! After the ultimely closure of the Book Tower in January 2009, Bookies Bar & Grille (formerly Bookies Tavern) moved to their brand-new, completely renovated location at 2208 Cass (at the corner of Columbia) and just opened their doors for business last week.

This move was long in the making, as owners John Lambrecht and Mark Jerant had begun to see the "writings on the wall" of the imminent closing of the Book Tower, Bookies' home (and namesake) since it opened its doors in 2003. They wanted to keep their bar downtown as they feel very passionately about the downtown community, and when they found the location at Cass and Columbia they knew it would be their new bar. They planned on opening a new location here regardless of what happened with the Book Tower (this would simply have been a second bar with a different name), but as it happened the new location was seredipitous and allowed for a speedy transition of the old Bookies to the new.

And what a transition it was! Upon entering the new building, I could still smell the construction--sawdust and plywood and plastic--new building smell, not umlike new car smell, and not at all unpleasant. The first floor serves as the main dining area, and it is open, airy, and spacious, with high ceilings and tall windows and a gorgeous stone and granite bar that seats 20. There are six high definition plasma televisions lining the walls and a 16-foot projection television behind the bar to suit all of your sport-watching needs (which is what the former Bookies was known and loved for). There is a narrow spiral staircase leading up to the DJ alcove above the front door, and a décor that is markedly more trendy and contemporary (such as the stone walls and bar). 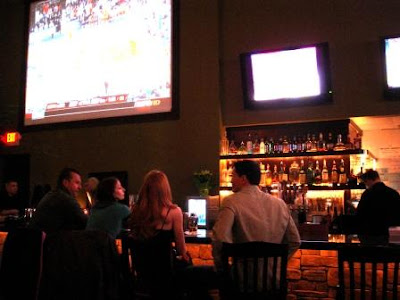 But that's not all...an elevator will take you up to the other floors. On the second floor you'll find a VIP lounge which overlooks the dining area and offers bottle service, its own private bar, private bathrooms, two more high defintion plasma televisions, and plush white couch lounge seating (also, if the VIPs don't care for the music the DJ is spinning, different music can be piped into this room, as well as the third floor). On the third floor you'll find the "lounge," three more high def plasma TVs, and the spacious rooftop patio deck which is sure to be a huge summertime hit.

In perhaps the greatest accomplishment of the new location, Bookies now serves food. Lambrecht and Jerant hired on 19-year restaurant veteran John Rodemich IV--who has served as the Executive Chef at Chuck Muer, 5ive in Plymouth, Sweet Georgia Brown, and most recently came from Michael Symon's Roast in the Westin Book-Cadillac. Rodemich serves as Bookies' Executive Chef, and has created a menu of contemporary American cuisine at reasonable prices that appeals to both the lunch and dinner crowds. The menu includes creative appetizers, hearty soups and salads, inventive sandwiches and entrees, and decadent desserts. Gone are the days of the simple burger and beer, as Bookies went and got itself gourmet. The kitchen is open until 11:00PM daily, with a limited menu available after 11:00PM.

Bookies is also still appealing to the downtown work and sports crowd by offering free shuttle service to and from sporting events as well as to and from workplaces (so downtown workers can enjoy lunch without having to move their cars, deal with parking or traffic issues, etc.). Just call ahead an hour before your desired pick-up time at 313-962-0319 or send an email a few days in advance to bookiesdetroit@gmail.com. Otherwise, secured and well-lit free parking is available in the lot behind the building. All three floors are available for party rentals, and Bookies was already named by the National Collegiate Athletic Association (NCAA) as the hometown bar for fans of the East Regional team that advances to the Final Four being held at Ford Field in April.

When I was there on Saturday, I was struck by the newness, the contemporariness, and the appeal this new location offers. The stone accents modernize this "sports bar" (which I think in all fairness needs to be considered much more than just that), and the contemporary American menu puts this restaurant on par with any other mid-tier restaurant offering contemporary cuisine in the city (the Majestic Cafe and Union Street specifically come to mind). DJ Sohand, whom I had never heard of before but now consider myself a fan, was spinning in the DJ booth top 40 hits by everyone from Keri Hilson to the Killers to Kanye West and "Calabria" mixed with his own house techno beats; the uninterrupted techno-flow made me feel like I was in the hottest club in town. The third floor lounge was packed and there were people filling all the first- and second-floor tables. And it was all so clean and trendy and modern and new! This is a far cry from the original Bookies...and might I say, a vast improvement. Bookies has graduated from a simple sports bar to a trendy dining spot, an ultralounge, and an entertainment megaplex. Brava, Bookies.

And as for the food: I sampled the "B.A.T. Sliders" (sweet and spicy bacon with avocado, tomato, and mayonnaise) and the Apple BBQ "Go Wings." The bacon on the sliders was thick and meaty, full of the promised sweet-and-spicy flavor, and the sauce on the wings was thick, tangy, and sweet, strong with a maple-hickory-apple flavor. Other selections include Salmon Cakes with a spicy remoulade sauce, BBQ Pork Sliders or a full sandwich (served with fries) with the same Apple BBQ sauce and tabasco onion frizzles, a New York Strip Steak with Guinness Peppercorn Cream Glaze and tabasco onion frizzles (with choice of fries, rice pilaf or roasted vegetables), and a "Fantastic French Toast" for dessert, served with vanilla ice cream and caramel maple syrup. The menu is small but the selections are unique, flavorful, and reasonably priced. Also, the waitstaff is extremely eager to please, helpful, and attentive, and I saw several familiar faces from the Detroit bar and restaurant scene who have described this new Bookies as "more [their] speed." 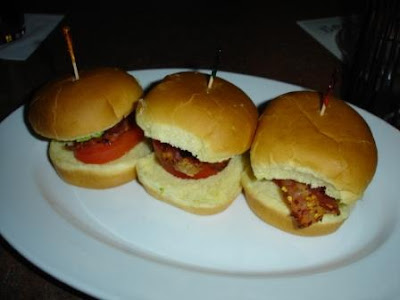 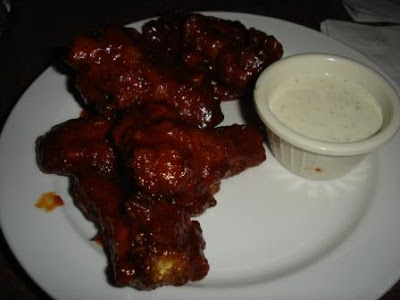 This new location promises to appeal to a wide variety of clientele, from the sports fans and locals who were with them from the beginning to the savvy nightlife scenesters and the discriminating diners that would not have had reason to frequent the old locale. Well done, Bookies. When life gave you lemons you went and made lemonade (or, at least, vodka lemondrop shots).
Posted by D-Tales
Email ThisBlogThis!Share to TwitterShare to FacebookShare to Pinterest