Somewhere inside of me there is a fat girl just dying to get out. (She's been making some progress too, but more on that perhaps another time.) Biscuits and gravy are a relatively new discovery to me. Years ago the whole concept of biscuits slathered in sausage gravy and served like slop on a plate just didn't appeal to me and I refused to eat them. Then one day I said WTF and tried some and it was love at first clogged artery. (Turns out Southern-style food is pretty much my favorite.)

I exercised a little bit of leeway on this list. Though my preference lies with sausage in my gravy, there are some places making a fine veggie version; and while others have a form of biscuits and gravy on their menus under "bennies," I decided anything with a biscuit base and gravy on top counts.

Oh, and all of these places (at least in the top 5) make their own biscuits from scratch, which is very important in the biscuit/gravy quotient so that the biscuit has those slightly crispy edges (not all soft like Wonder white bread) and can hold up to a gravy soaking. 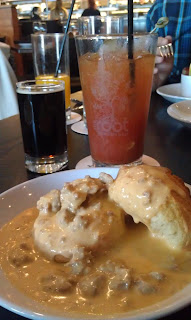 #1 Mae's (Pleasant Ridge)
Here it's called a Hillbilly Bennie, and it is the most wonderful and amazing thing you could possibly stuff in your taste hole. Fresh, flaky buttermilk biscuits topped with -- get this -- Southern fried chicken, poached eggs, sausage gravy, shredded cheddar and Frank's Red Hot. I hope your head just exploded because mine did the first time I had this.

#2 The Root (White Lake)
They don't usually do brunch. In fact since they opened in May 2011, they've hosted exactly one brunch -- on Black Friday. At this brunch they had biscuits and chorizo gravy, all made from scratch. It was phenomenal. (And spicy! I love spicy.) It was so phenomenal I begged (*whined) Executive Chef James Rigato to do it again this year. So he is. Please go, and enjoy.

#3 Imperial (Ferndale)
What luck would I have to happen to stumble in to Imperial in Ferndale early on a Sunday afternoon when they were testing out their new brunch menu! Behold: biscuits and spicy chorizo gravy topped with fried eggs and served with fresh fruit. If you want kick up the flavor of something (anything), put an egg on it. Try it with their Hair of the Dog special -- Bloody Mary, shot of tequila, smoky treat and a match. 'Cuz that's how they roll here.


#4 Mudgie's (Corktown)
Mostly known as a sandwich shop, Mudgie's also serves a Sunday brunch. (Which will maybe one day include booze?) The biscuits are Jesus Christ these could break your fucking teeth maybe not the best, but the gravy? *GASP* You know what? Skip the biscuits and eat this gravy like a delicious, hearty, slightly spicy stew. Loaded with spicy sausage and vegetables without any of that thickening agent non-flavor flavor, the gravy alone eats like a meal. Only at, you know, like 8 thousand million trillion times the calorie and fat gram count than, say, beef stew. Which is why it's better if you just don't count it.

#5 Russell St. Deli (Eastern Market)
They serve breakfast Monday through Friday but it is usually only on Saturdays when you'll see the biscuits and gravy special pop up. And Saturdays usually come with a ridic wait time (wait until winter when all the stroller jockeys stay home; much more navigable then). But if you see their biscuits and gravy on the special board, get them. Two big, beautiful biscuits served with a bowl of slightly spicy gravy, plus this place is Detroit bucket-lister so two birds, etc.

Honorable mention: PJ's Lager House. Their biscuits and gravy are vegan and damn tasty; you'll know it's not pork sausage, but you won't care.