I am a teller of stories. It’s the part of this job I enjoy the most, the part that is the most interesting. If you want to know what kind of food a place serves or what it looks like on the inside, there are plenty of other media outlets that will provide that information for you in spades.

If you’d like to know what kind of food and drink is served at the new Great Lakes Coffee Roasting Company bar and café in Midtown, read here.

If you would like to know more about what it looks like on the inside, read here.

Now allow me to tell you a story.

The Great Lakes Coffee Roasting Co. bar (TGLCRC? …alas, a bit cumbersome) – an artisan coffeehouse and craft beer/wine/cocktail bar somewhat cheekily referred to as “The Institute for Advanced Drinking,” or IFAD for short (much better!) – was not a place I had intended on featuring. In my endless quest for ego gratification and the desire to be FIRST, I simply did not feel compelled to add my voice to the chorus that already have and will very soon be singing the praises of this place. If I’m going to write about something EVERYONE else is covering, I’m going to do so way before anyone else does (here, and also here). 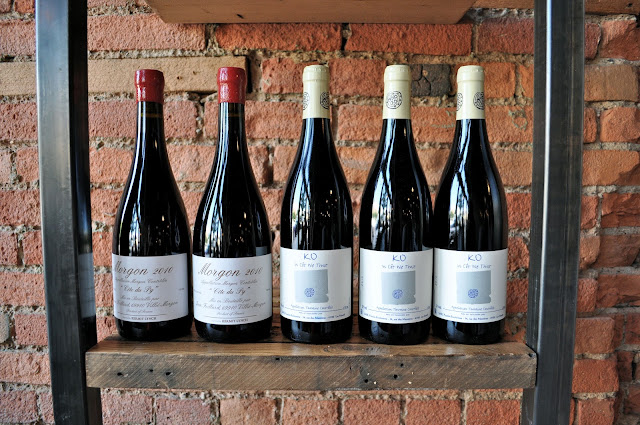 And then I visited during the week of their soft open. And I chatted with partner, roastmaster and public personage James Cadariu. And now here I am, despite my aversion to redundancy, writing on the very place I had previously resigned to let every other blogger and writer in town trip over. TGLCRC, IFAD, the Institute … call it what you will, but this place is on another level. This isn’t just another bar with trendy city cred and equal parts hipster and booster appeal. (It is both of those things, but also more.) It is a place to communicate and commiserate, to caffeinate and congregate, to imbibe and indulge. To work. And also play.

James Cadariu is also a storyteller. I had a chance to sit with him at length and get what is ultimately just a glimpse into his mind, but found it a fascinating place to wander around. So here is a little piece of his story; the rest I suggest you discover for yourself by bellying up to the bar and engaging him in conversation. (He’s the guy with the beard, and you’ll know what I mean by that when you see him.) 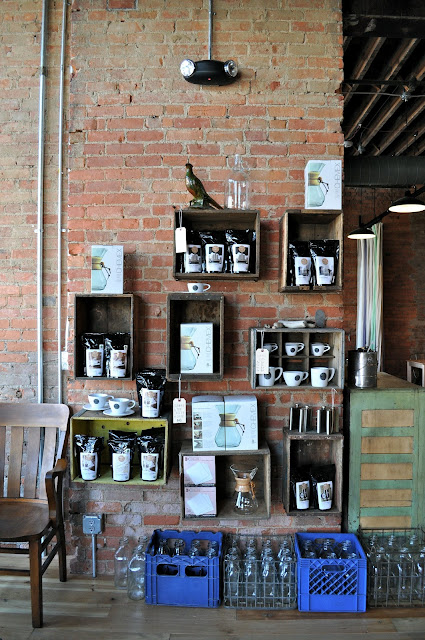 James started roasting coffee while working as an attorney in wine law (a background which has certainly helped inform the IFAD endeavor). At the time Great Lakes was owned by Greg Miracle and was still importing coffee in addition to roasting it; now they roast and sell only their own and for several years have functioned primarily as a roaster/wholesaler.

Great Lakes started as a retail space in Eastern Market’s Shed 2, when the Eastern Market Corporation began courting independent food businesses and start-ups (and not just farmers). “We came into it backwards,” James says of opening a café after securing a position as what has become easily the largest wholesaler of locally-roasted fair trade organic coffee in metro Detroit.

James, much like the other artisan coffee roasters in metro Detroit who are collectively contributing to the Seattleification of the area, is seeking to undo the damage that was done during the decades of coffee’s commodification, when it was a mass-produced household commodity freeze-dried and shipped in plastic tubs, a product of agricultural industrialization. He wants people to treat it more like wine, to discover its nuances and complexities. The booth in Eastern Market was the first time the Great Lakes staff engaged the customer directly; as they began to foster those direct customer relationships, the idea for a Great Lakes café took root.

He could have opened ‘the Institute’ in Ferndale or Royal Oak, but he wasn’t interested in that. Instead, he connected with “Mayor of Midtown” Sue Mosey, long-time President of the University Cultural Center Association, and had what he jokes is the “traditional experience of driving around in Sue’s Subaru looking at spaces when you’re trying to open a business in Midtown.” It ended up being a serendipitous relationship; Great Lakes is housed in the same building as the Midtown Co-Lab, part of the Woodward Corridor Initiative that will be a long-term evolving project rehabilitating vacant spaces all along the Woodward Corridor. James’s plan is to evolve with them. “The idea of activating a blighted block all at the same time interested me more than just the realm of coffee,” he states. “[These are] the relationships that add value to the drinks. Part of it was planned; part of it has taken on a life of its own.” 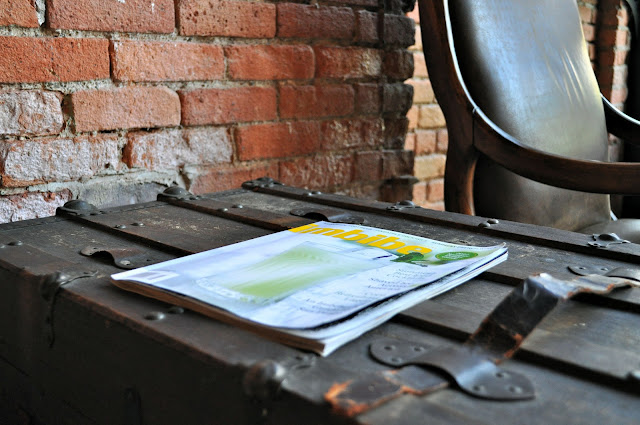 He hopes to repeat the same formula with Mosey in the future, opening coffee houses that are community spaces that help shape and build the community around them. “I don’t want to franchise the fuck out of it,” James says firmly. “This is sort of my baby, my vision. We can take this from one blighted area to another. If you have an anchor tenant like this, that brings people in.” He speaks of the traditional coffee house as being a place where people talked, where ideas were exchanged, where relationships were formed. With the Institute he wants to foster a community space where people can come to work (they’ve got WiFi) and meet and talk … and also drink. “I know from planning this business I made more relationships at the corner of Slows’ bar that I would have anywhere else.” 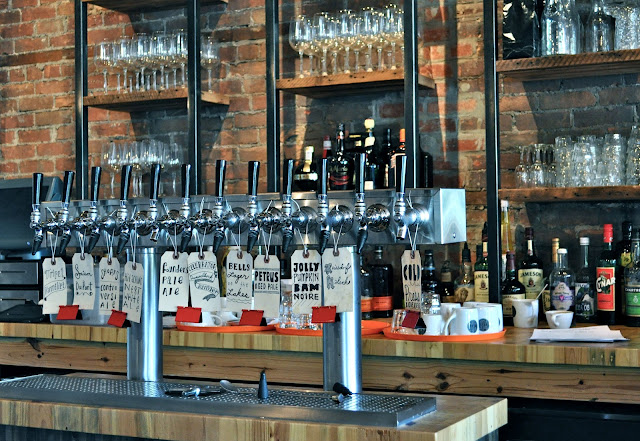 And those relationships are often born out of the stories behind the places and producers, like wine made from grapes grown on the side of a volcano with no commercial yeast or sulfur dioxide added in. He wants grapes that are sustainably grown, wine that is in its natural state straight from the vine, “not fucked with,” and to be able to manage that whole chain of knowing the grower, the winemaker, the importer, all the way down to the customer. “My relationship with [my] customer is in having all those other things in line … I don’t want it to seem pretentious but we did select these things for a reason.” He says that part of that selectivity is inherent in his business ethos, but “part of it is also because that’s how I want to drink.”

In talking to James it is clear that this is a person who is utterly restless in the best possible way. Words pour out of him with such fluidity that the best you can do is cast a mental net and hope to catch as much as you can. “I would keep getting degrees and never got a job I enjoyed. I had such an odd life…” This is a guy who went to Scotland just to try Scotch because he wanted to learn more about it. “My mom always said it would all come together and it finally feels like it is.” 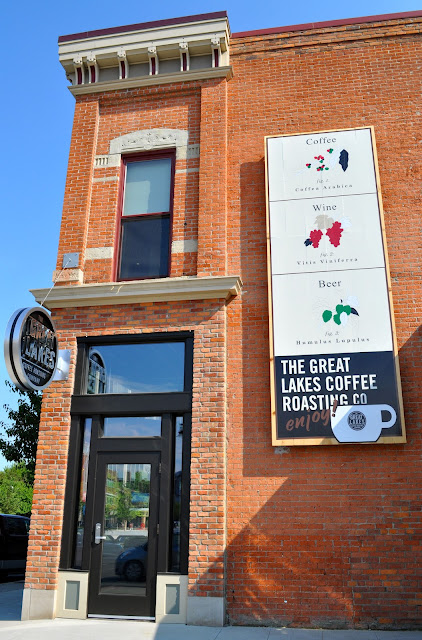 He is very much the storyteller himself, telling tales peppered with sly one-liners you might miss over the sound of your own blinking – stories of his parents, stories of the city, stories of himself. “Story-telling to me is part of the fabric of any society,” he says. He speaks of old men sitting around a table reminiscing over the way things used to be, and how he loves the idea of the old Irish poet. “Food to me [also] ties into this a lot. Food has this element of bringing people together.” He jokes, “The key to peace in the Middle East is falafel!”

Ultimately James wants the Institute to be a place that helps build community. And not just the community of entrepreneurs and creative types who will inevitably be drawn to the space, but the drinking community as well. And not the SHOTS SHOTS SHOTS SHOTS SHOTS SHOTS drinking community; James seeks to be more civilized. He wants to share these tremendous (and tremendously limited) wines he has sourced, and the quirky coffee-based cocktails they’ve created, and the crazy wild yeast-fermented beers they’ve acquired. “My goal is to expose as many people to these things as possible. I’m not worrying about ‘competition’ but about everybody having good wines so I have somewhere to go … [this is] the agenda of the drinking crowd, not to be pretentious or douchey but just to get better product out there.”

Recently there has been a bit of a surge in craft bars and artisan coffee roasters opening in and around Detroit (Astro Coffee, Sugar House and Anthology, just to name a few), and James welcomes it. “I think that helps the overall culture of this area … we need to collaborate because there’s so much crap out there, and [we need to] be exposing people to [better products] so they’re looking for that.”

James has many ideas for future plans and other things he can do with this concept, and as someone who doesn’t ever seem to rest easy we can be assured it will only be a small matter of time before his next big project. He jokes that no matter what he does, “I would love to have booze anywhere I go. It’s just normal. Why isn’t that true in all parts of life?”