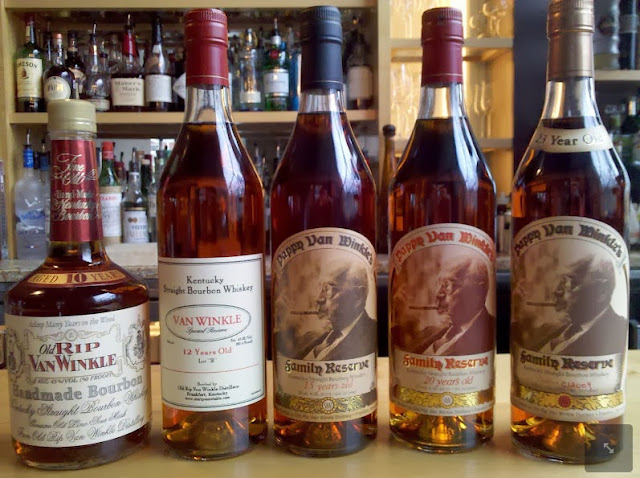 If you're a craft beer nerd, you are more than familiar with the concept of white whales: Pliny the Younger, Dark Lord, KBS, CBS, Heady Topper, Black Tuesday, and so many more all have cultish followings with people willing to pay ten times retail or more just to get their hands on a bottle. The beers are made in limited quantities and with limited allocations, sometimes never even distributed out of their own state, sometimes never even distributed outside of their own brewery. (Yeah, all you Dark Lord Day nuts, I'm looking at you.)

Spirits are a different story. There may come a day that a west coast distillery will grow to have a serious cult following all over the country and people will pay several times over what it's worth on eBay to get their hands on a bottle if it's not distributed in their state. But the fact is, we're just not there yet with American craft spirits.

Except when it comes to Pappy Van Winkle.

(We're going to be taking a long walk for a short drink of water here so just sit tight, this will all come together soon enough.)

Old Rip Van Winkle was a pre-Prohibition brand that was resurrected by the Van Winkle family in the 1970s. The Pappy Van Winkle Family Reserve is the rarest of the rare, bottled in 15-, 20-, and 23-year-aged releases. It has been contract distilled by the Sazerac Company at the Buffalo Trace Distillery since 1991, but because of the low production and extremely long aging process - much longer than what any other distillery is willing to sit on - it is the rarest bourbon in the world. While some distillers get a little persnickety over which distillers can accurately be considered "craft" and which are merely glorified finishing houses - buying all of the booze pre-made by the tank only to finish it with their own flavors and age it themselves, putting their own labels on it and calling it "craft" - no one seems to split hairs over Pappy.

"Why not just make more of it?" For the same reason every new distillery starts by producing vodka (it's the fastest turnover from still to bottle and the fastest way to start bringing in money) and why you don't see quality whiskeys coming out of craft distilleries that just opened in the last two years - age. Anything other than white whiskey (whiskey that hasn't spent any time aging in barrels; it's basically moonshine and almost always terrible so please stop making this trendy) has to sit in barrels for at least a year, and even then you're rushing it. 18 months is the minimum for most, and two years is more preferable still. But beyond two years isn't practical for most companies. Why? Not only is storage often an issue (and it is, because those barrels need to sit somewhere), but this also means that these distilleries - so many of them still pretty new and operating on shoestring budgets - are sitting on hundreds of thousands if not millions of dollars worth of product, just for those two years.

Now multiply that by about 10, and you'll see the Van Winkles' predicament. Also, what is trendy now might not still be trendy 15, 20, or 23 years from now - aging bourbon for this long is a long-term commitment and a long-term gamble, and company president Julian Van Winkle III doesn't want to sit on millions of dollars worth of bourbon he can't sell 20 years from now. Can you blame him?

And this brings us to the Pappy Panic of 2013. You see, Louisville Magazine wrote a pretty great story on the brand earlier this year, and that story got picked up by the Wall Street Journal, which then got picked up by every lifestyle aggregator blog in the country, and now everyone wants Pappy. And everyone already wanted Pappy, but now it's EVERYONE. Pappy Panic was further perpetuated by a massive theft of $26,000+ worth of product from the company reported earlier this year, and reached what one can only hope to be its nadir (but probably not) with the announcement of a Pappy Van Winkle clothing line. Which, much like the Ferrari clothing line, will probably be worn almost exclusively by people who have never so much as seen or touched a bottle in their lives and never will.

SIDEBAR: This will also lead to people who have had it claiming that it's good, but it's not THAT good. (I've already heard it myself.) In short, both media and people are awful.

So! For all you shameless white whale chasers out there, and also those of you who really truly and sincerely love bourbon (please let it be more latter than former), here are a few places around town where you can find it right now. Know of somewhere that I missed? Leave it in the Facebook comments.

The Oakland, Ferndale
Yep, they have it, at least as of Friday night. And I would guess they always have a stash of it somewhere if you know how and who to ask. But I'm just guessing here.

Palate, Milford
They had five bottles as of Friday.

The Raven's Club, Ann Arbor
On Monday the Raven's Club is hosting a Pappy Van Winkle tasting with Old Rip Van Winkle Distillery President Julian Van Winkle III. They'll be tasting five bourbons from Julian's own personal collection, paired with dishes from Ann Arbor and Detroit area chefs. For bourbon fans, this is pretty much the place to be - alas, it's already sold out, but maybe stop by and see if anyone will let you lick one of their glasses when they're done.

The Wine Garden, St. Clair Shores
Want to buy a whole bottle of it and not just drink a little of it at the bar? As the number four account for Buffalo Trace in the entire state of Michigan, the Wine Garden is one of only a few stores in the state that will receive an allotment (they are expecting six bottles). In order to be as fair as possible, they are going to raffle off the bottles at a party in-store on December 19. Stop in the store any time this month and buy a bottle of bourbon to be entered into the drawing. There will be only three winners and you MUST be present for the drawing to win. "Wait, only three winners? You said they were getting six bottles! What about the other three?" This store has customers that spend hundreds if not thousands of dollars a year on bourbon, and those special customers will get first dibs. Why? Because sometimes a store wants to reward their loyal customers and not just cater to the Ahab assholes helicoptering in for their first and last time ever in the store to get a rare bottle of bourbon they read about on the Internet, that's why.

UPDATED: Townhouse in Birmingham has some, Red Wagon in Troy is selling it for $500/bottle, mL Spirits in Birmingham has some (including the 23-year), Merchant's Fine Wine in Dearborn has it but there is already a two-year waiting list, and One-Eyed Betty's has a serious stash of it as well as their own single-barrel batch of Buffalo Trace.
Posted by Unknown
Email ThisBlogThis!Share to TwitterShare to FacebookShare to Pinterest