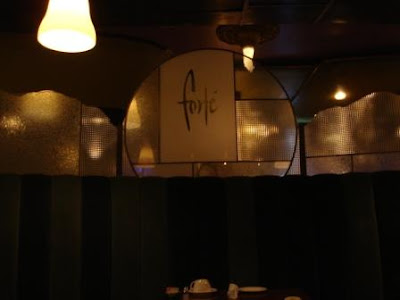 It's been years since I've been to Forté in Birmingham. What I do recall was a largely unremarkable experience; a whole lot of flair with little else, and a solid but overpriced wine list. Suffice it to say it did not make my short (or even semi-extended) list of places I would put in my regular rotation.

Then I recently found out that Don Yamauchi, formerly of Tribute Restaurant in Farmington Hills (a former favorite of mine) which is operated by the Epoch Restaurant Group which also owns Forté, is now the Executive Chef there (after a brief stint at the MGM Grand Michael Mina restaurants--by the way, MGM seems to have a hard time maintaining quality staff--most of those who went there in search of greener pastures have since left and returned to the area's tightly networked independent fine restaurants). Since taking over late last summer, Yamauchi has completely transformed their menu, making it a little more affordable and now serving breakfast, lunch and dinner.

(Note: hours may vary over the next month or so as the restaurant closes sporadically for renovations.)

Yamauchi has maintained his very unique cooking style. As a half-Latino, half-Japanese chef raised in the southwest with Tex-mex cooking traditions, Yamauchi has maintained his multicultural identity on this simple, unpretentious menu. Hearty meat-and-potatoes -style dishes meets a smattering of more delicate fare, but unlike Tribute (where Yamauchi had to follow in the steps of the indomitable Takashi Yagahashi, a difficult adjustment to make for all involved), this is not haute cuisine. Perhaps it never really was, but under Yamauchi Forté has become the kind of place where one-pound pork chops and whole chickens marinated in sea salt and cinnamon dominate the menu.

Catering heavily to good ol' boy American tastes, Forté's menu features items such as an Iceberg "Wedge" Salad (chopped iceberg lettuce with candied pecans, bacon, grape tomatoes, and 1000 Island Dressing), a great big whopping wedge of culinary faux pas in any fine-dining establishment but here, it just seems to fit. There's also pizza--plain old regular build-your-own pizza--and for kicks, the Forté Kobe Cheeseburger (a half pound of kobe beef on a brioche bun with Don's special sauce). The menu may be simple and overly American, but here it seems like Yamauchi is finally having some fun. 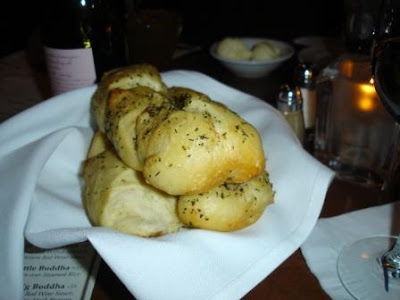 We started with a basket of their soft and easily tearable fresh-baked salt-and-herb-encrusted bread, served piping hot with creamy butter. I then moved on to the Buffalo Chicken Spring Rolls with celery and bleu cheese (Far East meets southwest if ever there was), which tasted exactly how you think they would and made me want to drop all etiquette to lick my fingers and ask for a wet nap. Other starters include Chilled Vegetarian Spring Rolls and a Crispy Maki Beef Roll with horseradish aioli, and this is where Yamauchi's Asian culinary background is most evident on the menu (aside from the creative Wasabi Mashed Potatoes served with the whole chicken). You can also order "Garlic Braised Snails." Yes, "snails." Not escargot. Snails. Another fine dining faux pas but at this point you should expect the unexpected here. Like the truffle pig I am, for dinner I sniffed out the one thing that made this menu most intriguing to me: the Eggs Rosini. Short rib hash, foie gras, and white truffle hollandaise. One of my favorite dishes in some time, and quite a standout on a menu of steaks and chicken pot pie. Even though it didn't really seem to belong on the menu, it definitely belonged in my mouth. The hollandaise was strongly aromatic of white truffles and the foie gras was absolute perfection--probably the best-prepared foie gras I've ever had, cooked to a perfect temperature and not at all burnt. The flavor was also fairly mild for foie gras, and melted in my mouth like butter right alongside the decadently rich hollandaise and slightly crisp short rib hash. Plus, the title egg, which added even more richness. 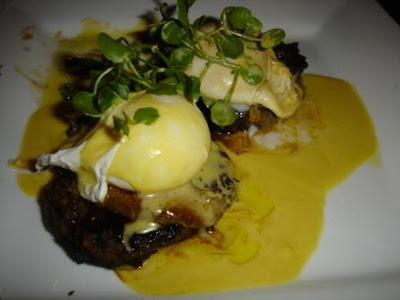 The desserts sounded delectable, but at that point I had consumed a week's worth of fat grams and was ready to be rolled to my car. I did sample some of my friend's Fresh Fruit and Sorbet with lemon and strawberry house-made sorbets. A perfectly light palate-cleanser. 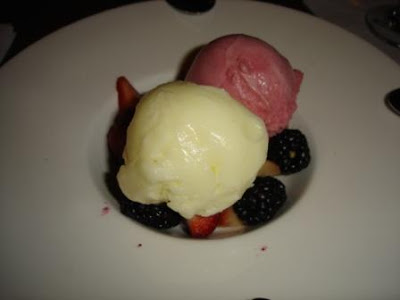 The wine list is as solid as I remember--somewhat boutique-ish with some favorite names such as "Cakebread" and "Sin Zin." Big on California. About 10 wines from France, Spain, and Italy, yet the Italians are all heavy-hitters (two Brunello di Montalcino labels, a Barbaresco, and Ornellaia...someone here likes their Italian wines). Some decent "New Worlds." Nothing too amazing. Fairly priced. We split a bottle of the Paso Robles' Clos Mimi Petite Rousse Syrah--soft, perfumey, lots of fruit including sweet cherries and red currant with a hint of spice; more than anything I knew it would be something my friend would enjoy as it is not one of those punch-you-in-the-face loud, stinky reds that I typically like.

At Forté the menu might scream casual Americana, but the ambiance and service does not. Our server was extremely polite and knowledgable, offering his help in making wine selections and even offering to run outside and put change in my car so I wouldn't have to...though I'd never dream of actually allowing him to do this (Can you imagine!?! "Sure, it's down the street on the right, here's a quarter."), it was still a show of stellar service that he even offered. He commended particular selections (including my Eggs Rosini), and was incredibly patient when my friend wavered aloud over particular options and even offered his input. He was speedy and attentive and exhibited all the proper decorum; a stellar presence of absolute professionalism in this restaurant. Service truly can make or break a meal. 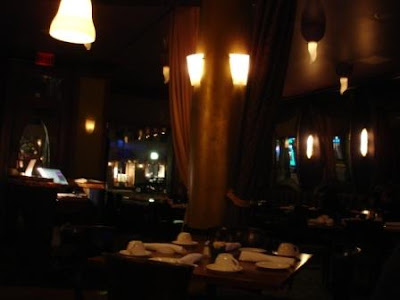 The décor is a bit...stuffy. It's very pretty and very trendy--perhaps too pretty and trendy for the direction the food has taken. The dark colors and heavy drapes which line the dining room are a bit too much for an establishment that should be a little more light and fun, open and airy. I do like the neon blue-illuminated wine cellar as well as the blue-and-gold mosaic tiles in the bar area, but after so many years of the same-old, Forté could use a facelift to go with the new face in the kitchen. And perhaps that is the plan with the coming renovations, which should now be underway. 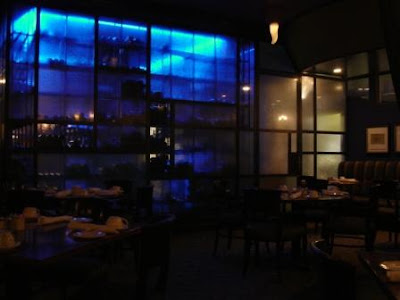 In the before time, the crowd at Forté could be a little Birmingham-y--old rich folks in the early evening followed by pampered young trustfunders at night. When I was there on a Friday the crowd was a little more laid-back with people just drinking and laughing in the bar (instead of pursing their lips and looking to see who's looking at them) and only a handful of other guests in the dining room after 9:00. The lunch crowd should be a good draw as their lunch menu is ideal (French Onion Soup and Mile-High Pastrami, anyone?). I'm excited to see these changes that Forté is going through and I think they will best suit the restaurant in the future. The times they are a'changin' and for a place like this to stay successful, it must cater to more traditional tastes (i.e., comfort food at comfortable prices). I commend Yamauchi's plucky audaciousness in creating a decidedly non-trendy menu in a historically trendy place, and for being so bold as to shirk fine dining conventions and just call a snail a snail.

Looking forward to seeing what else you do, Don.
Posted by D-Tales
Email ThisBlogThis!Share to TwitterShare to FacebookShare to Pinterest