The London Chop House offers a fine dining experience unparalleled in metro Detroit. This iconic Detroit institution originally opened in 1938 and remained open for 53 years, racking up national accolades as being THE place to see and be seen outside of New York and L.A. Known as much for its exquisite food and service as it was for being the social hub of Detroit's power elite – and during the many years of the Chop House's reign as the grand dame of Detroit dining, Detroit's power elite were among the nation's top – the Chop House is legendary, so much more than a space but a symbol of wealth, power and prestige.

And one year ago it reopened. 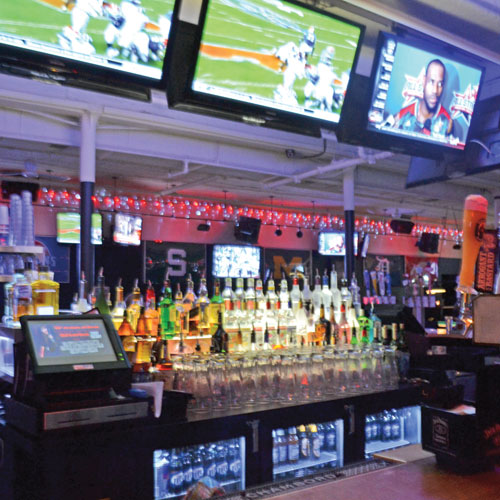 Fifth Avenue is one of the hottest spots to party in Royal Oak. Whether you're coming to check out the live bands upstairs, shoot some pool, take advantage of their great beer selection and killer happy hour deals, watch the game(s), or just chill with a group of friends, Fifth Avenue has you covered from every angle.

What sets Fifth Avenue apart from other bars that try to be all things for all people is that it actually succeeds at doing so. In the front corner you'll find a Vegas-style (albeit scaled down) sport book setup with leather lounge chairs and multiple big screen TVs. Grab your buddies and hole up for the night in this stylish and comfortable setting without missing a minute of the game.

I've spent the last few weeks being Grand Social Media Master Bloggery Empress Extraordinaire for GR Beer Week and it all culminated in Winter Beer Fest this weekend. While I have no plans to recap the whole excursion, this guy's pretty much sums it up. #11 x1000. [GR Beer Week / MLive]

Dan Gearig of El Guapo - Fresh Mexican Grill and The Mac Shack is showing metro Detroit how to build a better food truck with his new food truck fabrication business Red Beard Customs. The first of the fleet will hit the strEATs this spring and will be headed up by the fine folks at Corridor Sausage Co.  [Metromode]

So I posed this question: "Question: will Biggby Coffee be accused of being an evil corporate empire a la Starbucks once they go national, or will people still consider them a 'local' company that we should support since they're headquartered in MI? It's those fine lines, you know?" The answers were predictably polarized. [Crain's / EID FB]

The same thing happened here: "All of metro Detroit's dreams are coming true! The Cheesecake Factory will open its first-ever (and LONG discussed) metro Detroit location later this year. Where? Novi. Where else?" [Detroit News]

Luciano del Signore once again makes it to the James Beard Foundation Awards semifinals for "Best Chef Great Lakes." After just getting "Restaurant of the Year" for Bacco Ristorante, it would seem Lucky Luciano is having a pretty good year so far! [JBF]

LOLZ. Steve from Mallie's Grill N Bar is a great guy and these dudes look like total twunts. I hope someone IDs them and I enjoy this opportunity to shame them publicly. [MyFoxDetroit]

Cafe Habana in Royal Oak has closed and will be replaced by Monk this spring, which will be an even MORE Belgian of their sister Belgian concept Bastone. [EID FB]

This woman is changing the meaning of the term "foodie." Read more about the founder and mission of Restaurant Opportunities Center and COLORS-Detroit. [In These Times]

Another metro Detroit cupcakery will be featured on Cupcake Wars: this time it is Rockin' Cupcakes in Rochester Hills. [Rochester Patch]

Chelsea now has a smokehouse, Smokehouse 52 BBQ, in addition to the recently-opened Chelsea Alehouse. Chelsea may now proceed with being a city. [AnnArbor.com]

I'm kind of in love/obsessed with the whole concept of Selma Cafe. While I've yet to make it out to A2 at 7am on a Friday (awful early plus a whole of a driving for breakfast on a workday), one of these days I'd love to AirBnB it for a little weekday staycation (to clarify: they rent out rooms in their home where these events are also held through AirBnB). [Concentrate]

Luciano del Signore is all OVER the news this week! Here's more on the new Pizzeria Biga opening in Ann Arbor (*cough*FIRST*cough*). [AnnArbor.com]

A proposed bill would make some significant changes to the current liquor laws in Michigan, particularly as they apply to craft breweries and beer distribution, which of course the president of the Michigan Beer and Wine Wholesalers Association has a problem with. [MLive]

Beer reps from Powers do the Harlem Shake. [You Tube]


Miscellaneous
~Calling it: on February 18, 2013 at 8:35am (CST), poutine jumped the shark. Also, for those of you who didn't know, Chicago invented America. [Sun Times]

~Guy Fieri failed to buy the full domain name for Guy's American Kitchen + Bar. So this guy did instead. And put up an "alternate" menu with items like "Superbowl Bash Bro'det ($37.95): a bidet jammed to the brim with bubbling, overflowing Velveeta over a hidden layer of hamburger-fisted pig skins and a generous sprinkling of Dirty South Couch Crumbs. The bidet is an mp3 player that plays Smash Mouth while you eat. Serves one." [Business Insider]
Posted by Unknown
Email ThisBlogThis!Share to TwitterShare to FacebookShare to Pinterest 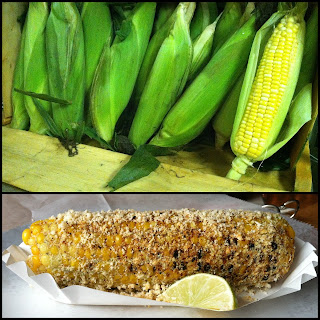 You don't have to be a vegetarian to enjoy these vegetarian-friendly restaurants. Whether you're looking towards a more herbivore diet for health reasons or you just want to enjoy something light for lunch or dinner, these (not always obvious) places located throughout metro Detroit have something on the menu just for you. And for you meatatarians out there, your love of bacon is no less pure and true if you occasionally mix in some garbanzo beans and greens once in awhile. 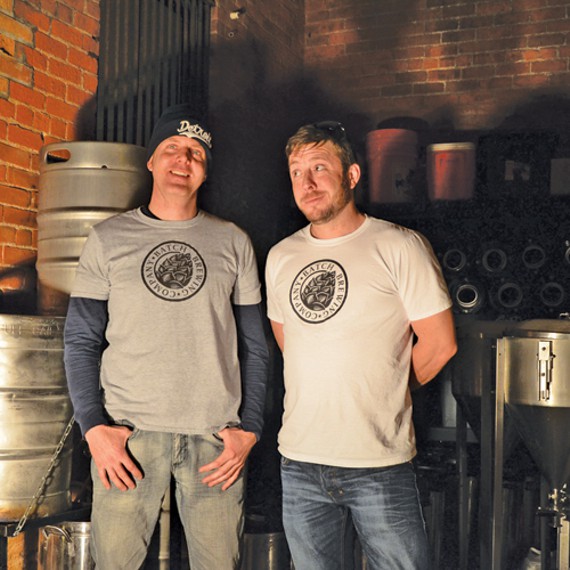 A nanobrewery, at that.

Batch Brewing Company has grand plans of opening in Corktown this summer and will fill that artisan craft nanobrewery void with their homemade nanobrews. They would also be the first-ever nanobrewery in the city of Detroit.

You can tell immediately upon walking inside the door that Rosie O'Grady's in Sterling Heights is the kind of neighborhood bar that people go to because they feel welcomed. Owner Rick Mickhail personally greets customers by name, asks about their families and swaps stories about parenthood. The staff has a clear camaraderie and there's a friendly vibe throughout that sets this place apart from your typical bar.

"This is dad's legacy," Mickhail says by way of explaining their commitment to quality service and making their customers feel welcome.


For those who bemoan the loss of Greek culture in Greektown, you need to take another look at Pegasus Tavernas. Owned by the Papas family, the longtime Greektown family of entrepreneuers, Pegasus has been located on Monroe in the heart of Greektown for 32 years now, and very little has changed since the very beginning.

"Pegasus has always been a Greektown staple," says Athina Papas. "It has very traditional food and [a traditional] atmosphere. We try to stay really true to that and keep it simple."

The Avalon International Breads long-awaited expansion -- which has been in the works at various stages since 2008 -- is finally coming to fruition.

The nearly 50,000-square-foot Avalon City Ovens production bake house located in an old warehouse at 4731 Bellevue on Detroit’s East Side is celebrating its grand opening this Friday, Feb. 22 with an opening party with food, music, and tours of the facility. This event is free and open to the public.

[Model D] Five years in the making, the Elizabeth Theatre inside the Park Bar takes a bow

"It’s really why I bought the building," he says. "This is the fulfillment of a long-term dream."

The bar had to come before the theatre out of financial necessity. "I had to do everything that was income-oriented first, and a theatre isn’t income-oriented. It’s all expense-oriented."

Perkins Pickles now has a production facility in Ham-town! This along with the announcement that Rock City Pies is setting up shop there later this year. Hamtramck is making a comeback-ack-ack-ack-ack. Just you wait. [Model D]

"And that's a wrap for Detroit Prime. Already." led to one of the greatest comment threads in EID history. [Crain's / EID FB]

Mudgie's Deli has a new happy hour menu. And it is covered in beer cheese sauce. [Mudgie's FB / EID FB]

A food truck, charcuterie and crossing state lines: check out what's next for Corridor Sausage Co. in Eastern Market. (Plus you can still catch them at the market on Saturdays, and their products keep popping up on local menus at places like St. Cece's Pub and Slows to Go.) [Crain's]

New Thai place opening in the Auburn this summer. [HuffPo]

B. Nektar Meadery has several new limited release meads coming out, and mark April 20 on your calendar for their Spring Mead Day when they'll be releasing two new barrel-aged meads. [B Nektar email]

Valentine Vodka was named "Best Love Potion" by the Tasting Table. Which makes sense since there's a whole holiday named after it. [Tasting Table]

And if vodka doesn't suit you, try Valentine's new Liberator Gin instead. [Thrillist]

Royal Oak's Pizzeria Biga started serving brunch this weekend on both Saturdays AND Sundays, because, as you know, brunch is too awesome to be just one day. [PB FB]

The Sunday Buffet is this new thing at GO Comedy! Improv Theatre featuring the debut of the saucy stylings of Sauced, the new solo venture from Chef Nick Schultz ("The Sauced Chef") formerly of Brew Jus. [GO! FB]

Paczki Day is a big deal 'round here. Here's a recap of what happened:

The Detroit CVB gave this run-down

Avalon celebrated "Phat Tuesday" with paczki that were baked, not fried

7 Brothers went at it hard

So did Whiskey in the Jar

Ronin got fancy with it

Deadline Detroit's Jeff Wattrick continued his annual traditional of photographing a prune paczki at various Detroit sites of interest, "Kim Jong-il looking at things"-style. This year, Paczki took a Detroit corruption tour of some of Kwame Kilpatrick's and Monica Conyers's most significant sites.

Zingerman's had the west side covered

Pure Detroit put together their own Hamtramck paczki guide

Eat It GR
Not much is happening here because why? Because I am in the midst of coordinating and promoting GR Beer Week, that's why. Starts Monday. Check it. [GRBW Official]

Beerie
~It's true: there IS no such thing as a perfect man. [Beer Pulse]
~Turns out the way to a beer lover's heart is through his (or her) stomach. [DRAFT]
Posted by Unknown
Email ThisBlogThis!Share to TwitterShare to FacebookShare to Pinterest