Another Fucking Bar and Grill: No, Really 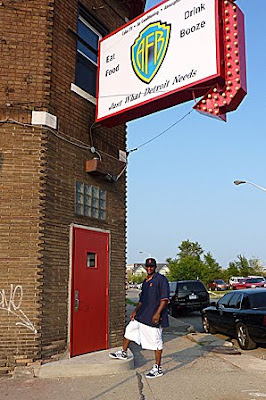 Detroit's got a new bar and grill...or, as the name so clearly states, Another Fucking Bar and Grill.
I for one LOVE the name, but that's probably only because it allows me to drop the f-bomb in a way that would not be considered inappropriate.

The general mentality of the place also suits the name: their website has a rotating list of pithy phrases including "Just what Detroit needs...," "Smoker's welcome. If you don't care about your liver, we doubt you care about your lungs," "Come back to the city your parents abandoned," and "Don't drink and drive. Drink and STAY." Their menu, which is currently only a small portion of what will eventually be a full menu with entrees, salads and the like, is affectionately titled "Little Ass Menu." The items on this little ass menu include "Sam and Ella's Chicken Sandwich" (sound it out...there ya go) and Mr. Potato Balls.

Located in that lovely stretch of desolation just north of I-75 the locals refer to as "Tweentown" (smack dab between Foxtown and Midtown), the owners of Another Fucking Bar and Grill hope to attract customers from the nearby theatres, sports arenas and casinos, as well as the WSU and DMC crowd. It is convenient to the freeways yet far enough removed from the hullabaloo of Foxtown to make it a prime location for a beer and a burger before or after a game.
Dave LaMarche, who owns the bar along with Christ Musianis, designed the place to be a laid-back, comfortable environment "where people can just come to have fun and meet new people." He insists that they're not high-concept, not a gastropub, and not a sports bar, but rather just a place where people can meet, chat, and share a few beers with friends and strangers.
But despite not being high-concept, the place still has its unique sense of humor. Aside from the name (which happens to be a throw-back to another place called AFB that was in Detroit in the '90s, and yes the two locations are affiliated) and the menu, there are little touches throughout the bar that elicit an unexpected giggle. For instance, the fact that the keg taps are housed in a wall of urinals.

Urinals.
Urinals are funny.
"It's like a fart joke that everyone gets," Dave says of the name and concept. Potty humor? Fuggedaboudid. The keg taps are urinals! "There are a lot of things here that people will have a reaction to, but its a friendly place," says Dave in reference to said urinal-kegtaps. "If you think about it, we just recycle beer anyway!" he laughs. "It gives people something unique to talk about."

That it do. Urinals.

AFB has only been about about a month, and while there is already a strong show of regular clientele, the place is still finding its footing. I was happy to see that they carry some Michigan beers, including Dragonmead's Erik the Red. (Sidebar: I naturally had to inquire about the absence of Final Absolution, to which Dave responded, "We don't want to encourage people to get drunk, but we would like them to be able to have more than one beer. Most people can't handle more than one Final Absolution." And how!)

While their concept is simple, comfortable, and friendly, this doesn't mean that they're serving equally simple pre-frozen and deep-fried food. As cheeky as the name is and despite the urinal centerpiece, the real standout here is the food. I tried "Another Fucking Burger," described as "slaughtered cow, hung, bled, freshly ground, seared and served on a perfect Avalon bun." This includes fries and coleslaw, and cheese can be added for no extra charge. AND it is served in a dog bowl. The meat is from Eastern Market's Fairway Packing Company, and the burger is intense. So tender, so juicy, so fresh...simply superb. When paired with the soft, airy bun from Avalon International Breads, it is a holy matrimony of burger and bun. This burger is on par with some of the much pricier "gourmet" burgers you would find at places like Roast and Bourbon Steak, and it's only $6.00.

For concept, design, attitude, and food, AFB is a win. I look forward to seeing their full menu roll out with their grand opening, which will be sometime before Thanksgiving. But if my words have made your mouth water and you find you just can't wait that long, bear in mind, they're still new and still acclimating, so do be patient. Also, check out the women's bathroom.

And, urinals.
Posted by Unknown
Email ThisBlogThis!Share to TwitterShare to FacebookShare to Pinterest