A Toast to Toast (Redux) 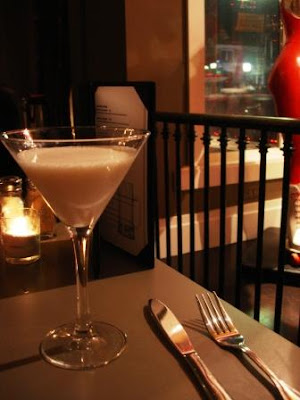 However, as luck would have it, I found myself at Toast this weekend enjoying a proper dinner there for the first time.

I loved this place before, and I must say I still love it now, maybe even a little bit more.

When I first walked in (on-time for my reservation, whaaaaat?), the manager greeted me by laughing, "How about this heat wave?" (it was in the mid-30s, after a few bracing 20-degree days). He was extremely polite and charming all the way to my table, and a few minutes later made rounds to inform all the guests that the servers were busy "conferring" on the evening's specials with the chef and would be around shortly. Yes, I waited a few extra minutes--which was really not an issue at all as my dining companion was late, if you can believe that someone actually arrived to something later than me!--but the fact that he took the time to forewarn everyone and was so congenial and friendly while doing so made all the difference.

Our server Tony arrived just as my friend did, and he was fabulous. Tony is the consummate service industry professional, striking me as someone who has been working in the business a long time and continues to do it because he truly enjoys it. He was quick to offer wine recommendations based on my partner's preferences (she likes Merlot, and offered to bring her a taste of their house Merlot which he strongly recommended, and later, during a discussion of Malbecs with which she was unfamiliar, offered to bring a sample of this as well). When she ordered the Fried Chicken and Waffle--classic comfort food if ever there was--then asked for his suggestions, he raved about the Carnitas Waffle, explaining their process for pulling the pork and exclaiming that it's his favorite thing on the menu. Based on this endorsement, she went the Carnitas way and loved it. 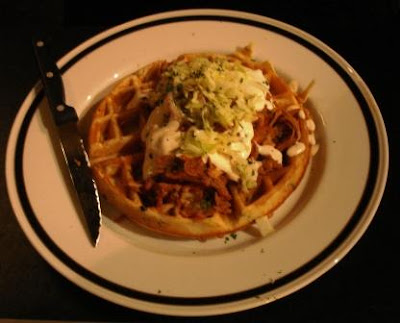 Tony also took great pains to make sure we were satisfied with everything, telling us about their Wine Down Wednesdays, encouraging us to check out their lounge, and even apprising us of his regular schedule so that he could take care of us again. He was friendly, knowledgable, and an absolute pleasure to have as a server. Service industry professionals everywhere could take a few cues from him, though his casual, personal demeanor works well in this location which seems to thumb its nose at the concept of being a Birmingham restaurant (this place has all the fun, casual, down-home hip vibe of the original Ferndale location, and none of the seemingly requisite B-ham pretentiousness--their $18 dinner entrees also scream "Fashionable Ferndale!" much more than "Biiiiiiiiiiirmingham").

Now celebrating their one-year anniversary, Toast in Birmingham is also welcoming a new chef. Chef Jeff Rose has worked in some of metro Detroit's finest and most eclectic restaurants, including Sweet Lorraine's, Big Rock Chophouse, Iridescence, Tribute, and most recently served as Executive Chef at Michael Symon's Roast during which time it was awarded "Restaurant of the Year" for 2009 by the Detroit Free Press. Rose is committed to making everything he serves (including stocks, soups, and sauces) from scratch in his kitchen, and tries to source as much as possible from no further than 100 miles of the restaurant. His commitment to local, sustainable cuisine echoes the availability of Michigan wines and hand-crafted beers already in the restaurant (they most notably carry Bell's, Short's, and Detroit Beer Co.'s seasonal brews on tap). They even carry their own blend of Fair-Trade custom Breakfast Blend coffee roasted at Beanstro Specialty Coffee in Waterford. While Toast may not wave their "local or bust" banner to the same extent that some other places do (you know who you are), make no mistake: hardcore locovores will be quite satisfied here.

So, how is Chef Rose faring so far? My dining partner and I, both lovers of all that which is pumpkin, both started with a cup of the Pumpkin Soup. Served with crumbled candied walnuts and Granny Smith apple slices, the consistency was almost that of a puree, and there was a slight spiciness (like heat from a hot pepper, but without that flavor) that just barely tickles the back of the throat. This satisfied the pumpkin itch, and also made me feel all warm and fuzzy and wintry. 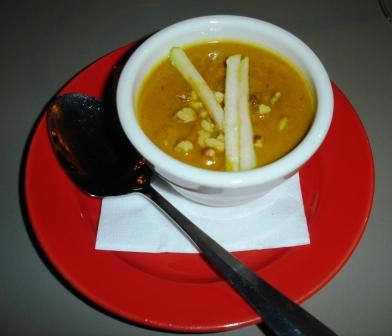 Next I tried the Cassoulet with duck confit, flagolet beans, bacon, celery, carrot, and onion in a rich duck sauce. A "cassoulet" is a classic French comfort food, more of a stew or casserole made with meat and beans. Rose's cuisine is French-inspired and this dish does well to fuse his cooking style with the comfy-cozy identity of Toast. This hearty dish was thick, rich, and very filling. The cassoulet itself was full of tender, flavorful duck meat, and the perfectly-cooked duck medallions on top were flavorful without being overpowering. (Word to those unaccustomed to duck: it is a very fatty meat--this just comes with the territory.) 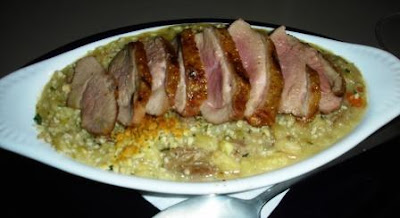 While my ability to sample various menu items was restricted due to time constraints, other notable menu items include the Butternut Squash Ravioli (you just can't ever go wrong here), and the homemade Mac & Cheese--made with goat cheese and smoked gouda. :O The cheese plank, which offers a heaping helping of different cheese varieties (cheddar, gouda, bleu) was also calling my name, but alas, it was not meant to be. (At least not this time...next time, look out!)

One thing I immediately loved about Toast was their creative cocktails, and they continue to impress. I sampled a season-appropriate Polar Bear Martini, made with Stoli Vanil Vodka, Frangelico, and Godiva White Chocolate Liqueur. Tony also told us about the bartender's specialty concoction, "Make Me Something Good" (inspired by people asking him to do precisely this). Three Olives Bubble Vodka, Zodiac Black Cherry Vodka, grenadine, sour mix, and 7-Up. "Something good," indeed!

Toast further entices diners with a number of weekly specials, including their "Wine Down Wednesdays" which I mentioned earlier. All glasses of wine under $10 are half off, and lucky you: this is one of Tony's regular nights! Tuesdays are $2 Taco Tuesdays, further cementing Toast's identity as a wholly casual and welcoming place. Much like their food, which is cleverly trendy yet completely comfort at its base, Toast is a comfortable, casual establishment which may look the part of upscale retro-chic Birmingham bistro, but plays more like a friendly (dare-I-say Ferndale?) diner. This is simply a great place to meet friends, have a few scrumptious cocktails, and enjoy some hearty food served with a smile by a fast new friend. 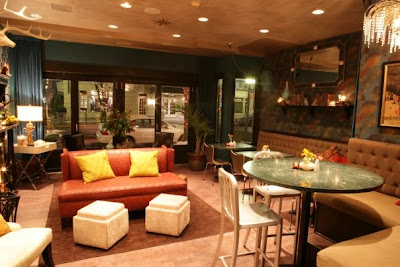 The Lounge at Toast, from the website
If you're still looking for New Year's Eve plans, Toast is hosting a Parisian-inspired celebration, complete with a six course meal, French wine pairings, live gypsy jazz and a champagne toast at midnight. The reception starts at 8:00PM with dinner served at 8:45PM on Thursday Dec. 31, 2009.

Following is the full menu with wine pairings:

Fromage – A Selection of Cheese

Django’s Tiger, a Parisian-style Gypsy Jazz band will perform throughout the evening. A champagne toast and countdown will ring in 2010. This whole event costs $95 per person, not including gratuity. Call (248) 258-6278 to make reservations; seating is limited and this event is expected to sell out, so don't dawdle!
Posted by Unknown
Email ThisBlogThis!Share to TwitterShare to FacebookShare to Pinterest