"With everything?" Yes, EVERYTHING.

Everything = ketchup, mustard, pickles and onions, wrapped in paper where they further soak in their own grease letting all the flavors marinate together (the true test of a good slider is how greasy the paper bag gets on your drive home). This is universal language for "everything" when at your local slider shack.  In metro Detroit, our little white huts of bite-sized burger worship have been around longer than most of us have been alive ... and the prices are practically the same as they were decades ago. Our slider shacks have a long history here, and the locals are fiercely protective of their favorites. Part of their appeal is their nostalgic sentimental value; the other part is their food: fast, cheap and greasy. Like relics of a former era - which most of them are (some dating back to WWII) - these slider shacks have silently shaped our food scene for decades, standing tall even as trendier and more commercial places have tried to de-throne them. Say what you will about your coneys; metro Detroit just wouldn't be the same without its sliders.

#1 Telway Hamburgers (Detroit)
Telway fans all swear they're the best, and that Motz, Bates and Greene's just don't compare. Located on Michigan Ave. in Southwest Detroit, Telway is probably the best-known of all the local burger emporiums. Part slider joint, part donut shop, they're open 24 hours and can cater to any and all of your grease, salt, fat and sugar cravings. They promise the "Best coffee in town," and at 45 cents it's pretty hard to beat. (We love $4 French press as much as anyone, but sometimes a no-fuss 10-second 45-cent cup of good 'ol American joe hits the spot.) Their burgers are a bit smaller, but at 85 cents at pop for a cheeseburger there's no reason to complain. Plus, this place is EXTRA adorable inside, even more old-timey and cute than all the other cute old-timey places. Cash only. Also in Madison Heights. 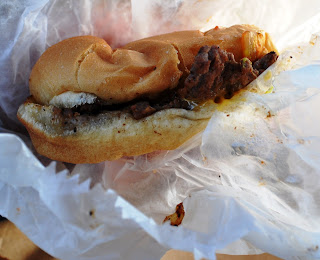 #2 Sonny's Hamburgers (Detroit)
Sonny's fans all swear they're the best, and that Telway, Motz and Bates just don't compare. Depending on your perspective, Sonny's has either the distinct advantage or disadvantage of being probably the least-known slider joint in town. Located in NW Detroit's Brightmoor neighborhood, it suffers from the seclusion of not being in one of Detroit's, errrr, trendier parts. But locals know: their burgers are the best. The BEST. Meatier, greasier, just plain gooder. The neighborhood might not be the most enticing but inside Sonny's is plenty welcoming (and no, there's no bullet-proof glass, just the same old giant stainless steel counter you'll find everywhere else). Their cheeseburgers are a little "pricier" at $1.50 each, but you're getting what you pay for. Plus you can order small or large burgers AND they accept credit.

#3 Motz Hamburgers (Detroit)
Motz fans all swear they're the best, and that Bates, Telway and Greene's just don't compare. Ahhhh, DELRAY, another neighborhood in Detroit you have to be a bit adventurous to visit (though being on the edge of SW it's a little less out of the way). Named one of the best burgers in the country by USA Today, Motz is known for thick, meaty "sliders" as big as regular fast food joint burgers, killer fries (with malt vinegar on every table), and a fairly diverse menu of other cheap 'n greasy victuals including other varieties of burgers. Like the geographically-appropriate Mexican Burger. And, Veggie. Which would presumably be cooked on the same beef-grease-coated grill. Which defeats the whole purpose. Kind of like ordering a veggie burger in a slider joint in the first place. Cash only.

#4 Travis Hamburgers (Saint Clair Shores)
Travis fans all swear they're the best, and that Motz, Greene's and Telway just don't compare. Open 24 hours and serving a bevvy of gut-bomb breakfast food in addition to glorious burgers, Travis is an eastside thing, you wouldn't understand. More of a full-fledged diner than a simple slider joint, this place is predictably packed after-hours and is also known for a stellar old jukebox that kicks out the likes of Patsy Cline. You want ambiance? This place has an old-school punk appeal that only comes with decades of serving drunkards warbling along to Johnny Cash. Cash only.

#5 Bates Hamburgers (Livonia)
Bates fans all swear they're the best, and that Greene's, Telway and Motz just don't compare. It's tiny, it's white, it's got the stainless steel counter and the old-fashioned sign menus with the push-in mismatched letters. Bates is known for having a slightly bigger burger, and no trip to Bates would be complete without indulging in their thick chocolate shakes or crispy crinkle-cut fries (add chili for extra oomph). They're also known for having solid coneys, and to mix up your slider experience a bit, get your burgers on a sesame seed bun. Open Monday through Sunday, 7am to 11pm. Cash only.