[EID Feature] Michael Symon is Effing Cool, But You Already Knew That: An Interview


I can't even venture a guess at how many times I've said in print, pixels and person that Michael Symon's Roast is the one restaurant in Detroit that nails it on all counts. (Here's one. And another.) I had the chance to chat with Michael more about what for the love of beer and bacon possessed him to open a restaurant in Detroit in 2008 when the sky had all but fallen, and his answer made me like him even more.

"We* love Detroit because it is so similar to Cleveland," Symon tells me. "It’s been through its ups and downs and gone through a recession; the different industries have been through their troubles and the middle class has taken a beating in both cities."  He jokes that his chef friends in New York make fun of him for his city selections: "My first restaurants were in Cleveland [and second was] Detroit!" He explains, utterly sincerely, "I have always loved the honesty of the Midwest ... we’re a group of people who really wear our emotions on our sleeves and are proud of where we’re from. When we first started talking about opening the restaurant, the community embraced us ... not only the community but the people."

No, but seriously, why Detroit?

"We’ve been opening in places that people have told us not to for 15 years now! We opened [Lolita] in Tremont when there were still fires and car bombs, then we opened [Lola] on East 4th when it was still an unpaved street. We started spending time in Detroit, we went to Slows and Eastern Market, and I said, 'This is a no-brainer, these are our people. They love what they’re doing and take pride in what they do.'" As far as his choice of location, he admits that he could have opened Roast inside one of the casinos but chose the then newly-remodeled Westin Book Cadillac for its history and its importance to the city of Detroit. "I also love the history of the Book; I loved that it was such a historic piece of the city for so long, then it went through its tough times and now I'm ecstatic to be part of the revitalization of it."

He adds, "Not to mention it was so close to all the coneys!"

[I ramble a bit about how Roast has "nailed it" in ways other area restaurants simply haven't, then finally get around to asking what his secret is.] 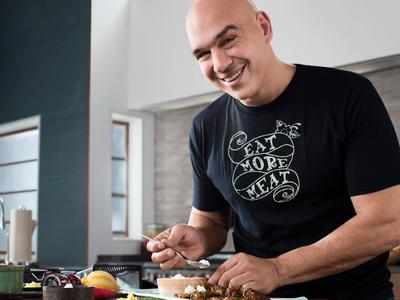 "I think we’re very unconventional," he says. "If we told people, 'Here’s how you open a restaurant,' they would look at us like we’re nuts! Whether we succeed or fail we go in with guns blazing." He emphasizes the importance of the staff he hires as truly being the thing that can make or break a restaurant of this kind, especially in the Midwest. "A lot goes into the hiring. We sit and we talk to the people and see if they’re passionate, see if they feel the same way [about food]. To work for us food, wine and beverage have to be a major, major part of your life." He emphasizes that they don't look for the people who are waiting tables just to pay for college or as a temporary gig. "We want people who are vested in it."

Symon explains that they have a food-first mentality with all of their restaurants. "We’ve been fortunate to make money in these 15 years because we never think [about food costs first]. We don't say, "Let’s put this on the menu because it will make money,' we say, "Let’s put this on the menu because it is delicious.' We write a menu say 'Oh my God, this is fantastic!' and we don’t look at staying at a 35% food cost. We do things a little backwards. We're driven by food and beverage from a how it makes us feel standpoint versus this is how we’re going to make money ... our food costs are a little higher, our labor costs are significantly higher, but our hope is that in 10, 15, 20 years we’re still going to be here - let’s make less money and be here a long time instead of let’s make a shitton of money and close in three years."

He continues, "The other things that really helped us in Detroit is because we're from Cleveland and we understand Midwesterners, how they value food and how they’re treated." Though he doesn't knock New York for its particular brand of "how lucky you are to be here" service (my words, not his), he defers to the fact that Midwesterners demand to be treated a bit differently. "How we go about service is very different ... we really try very hard to embrace our customers."

"We love what we do, and we love that we get recognized for what we do. Cleveland and Detroit are two cities I love and I always beat my drum and [try to get people to] see what the urban core has to offer."

And we love you for it, Michael!

*"We" refers to Symon's wife Liz and his business partner Doug Petkovic.
Posted by Unknown
Email ThisBlogThis!Share to TwitterShare to FacebookShare to Pinterest