This week Eater reports on Anthony Bourdain's latest literary foray Get Jiro, in which Tony takes comic book likenesses of world-famous professional chefs Jiro Ono and Alice Waters and plunks them into a near-future L.A. in which the "foodie movement" has become so entirely faddish and absurd that people will wait years for a table at the hottest restaurants, there are such things as "Holy Foods" and L.A. is run by "dueling chef warlords."

Anthony Bourdain is a fucking asshole.

This fucking self-important prick who built an entire career out of a "bad boy" image ("Look at me, I drank a lot, snorted coke and fornicated with women, oooooooooooooooooh") and by saying "fuck" a lot while picking well-publicized Twitter fights with other celeb chefs at opportune moments for maximum media coverage is now going to piggyback on the anti-foodie movement that is now gaining serious steam.

Way to stay ahead of the curve, Tony. You fucking asshole.

Yes, this useless windbag who helped propagate the very culture of food fetishization he now so valiantly satirizes is now happily inserting himself as the figurehead of The Resistance. Anthony Bourdain wants to have his Tod Mun Pla and eat it too.

Listen, you fucking self-serving opportunist, you don't get to create a foodie frenzy by promoting the idea of "the weirder and the more foreign the better," the very thing upon which the foodie movement now hinges, then turn around and say, "Fuck you guys for buying into it." Got it, Tony? You fucking blowhard? This is the same guy who, full of his signature macho bravado, proudly and loudly proclaimed when asked if he would eat another person, “Yes, yes, I fucking would.”

Of course you would say that. You fucking cunt. 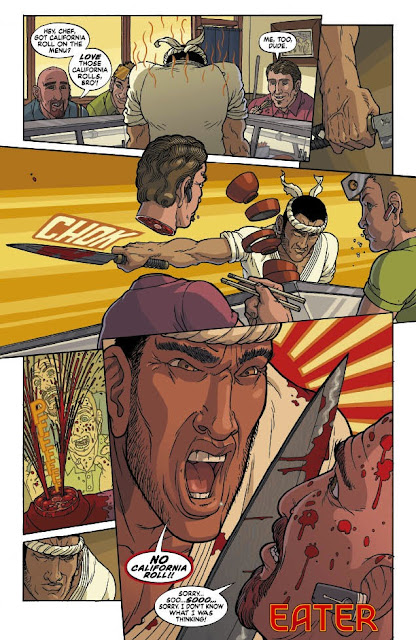 And now here he comes with his latest book -- the celebrity "chef" who is too busy hosting reality TV shows and insulting chefs who actually cook for a living -- targeting consummate professionals like the sanguine Jiro Ono (represented here as a young, muscled sushi chef beheading customers who dare ask for a California roll) and Alice Waters, a chef made famous not for her arm-flapping profanity-laced pleas for attention but for her dogged activism and her commitment to local, organic foods which has helped shape the future of American food and influence an army of chefs.

These are chefs who haven't cheapened themselves or their craft by running around as loud-mouthed reality television stars, who now appear on the pages of Bourdain's comic books as ... what? a homage? a mockery? Both? (While Bourdain has voiced tremendous respect for Jiro, it is doubtful Jiro would find this "homage" flattering; Bourdain's disdain of Waters is well-documented so it is equally doubtful his thinly-veiled portrayal of her is a show of professional respect.)

Bourdain should go on another stand-up comedy tour because Jiro knows you won't find him in a fucking kitchen. Now all of a sudden you have a problem with the foodie movement, Tony? What's the matter, is it getting harder and harder to force people to listen to the sound of your jaw flapping as more and more people horn in on your territory?

You know what the real problem is with the foodie movement? It's not the fact that people are desperately seeking out the latest and "most authentic" culinary adventure while trying to out-foreign and out-weird one another. It isn't that food festivals are the new music festivals and chefs are the new rock stars. It isn't craft cocktail bars and perceived cocktail snobbery. It's Anthony fucking Bourdain.
Posted by Unknown
Email ThisBlogThis!Share to TwitterShare to FacebookShare to Pinterest