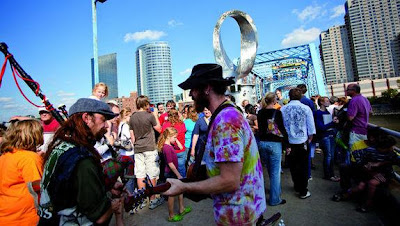 "Grand Rapids is fast becoming an impossibly hip, progressive arts town, thanks in large part to the explosive success of last year’s inaugural ArtPrize competition. ArtPrize began in 2009 and made waves throughout the international arts community by announcing the world’s largest prize for art: $449,000 in total prizes, with $250,000 going to the first place winner. And that wasn’t the only exciting thing about the contest; the entire competition was voted on by the public — the art world’s answer to American Idol.

'ArtPrize was nurtured into existence by 28-year-old Rick DeVos of Western Michigan’s empire-building DeVos family. His goal with ArtPrize was to create conversation — people talking about art, to artists, to each other; students studying art, people practicing art, people loving art, people just discovering art [...] Grand Rapids is just far enough away from metro Detroit to make it a nice weekend getaway, and in addition to this groundbreaking art competition, it also offers a wealth of exceptional places to eat, drink and be merry..."

Read the rest of the article (with an insider's restaurant and bar guide) here.
Posted by Unknown
Email ThisBlogThis!Share to TwitterShare to FacebookShare to Pinterest