When Eve Aronoff first emailed me to let me know about the vintage Coca-Cola cooler featuring work by Detroit street artist SinTex that she introduced into her dining room at Frita Batidos in Ann Arbor, I thought it sounded like a cute story or a fun factoid. It also recalled some work done by Antotnio “Shades” Agee last summer at Ann Arbor’s Grizzly Peak Brewing Company, a huge mural on the side of their building unveiled at a fundraiser to benefit the Ann Arbor Art Center.

Then just this past May vitaminwater introduced VitaminWater Uncapped LIVE at 1500 Woodward. When they took over the space from Vain Nightclub they completely redesigned the interior, bringing in well-known, renowned urban artists like Shades, SinTex, Tony Roko, Mike Han and Cedric Tai. The space-defining art became the highlight of this temporary venue – which, much like street art in its original form, was designed to be fleeting. The uniqueness of the space and the utilization of street art in this more “corporate” setting (it may be a nightclub but VitaminWater is owned by the Coca-Cola Corporation) became a hot topic of conversation. 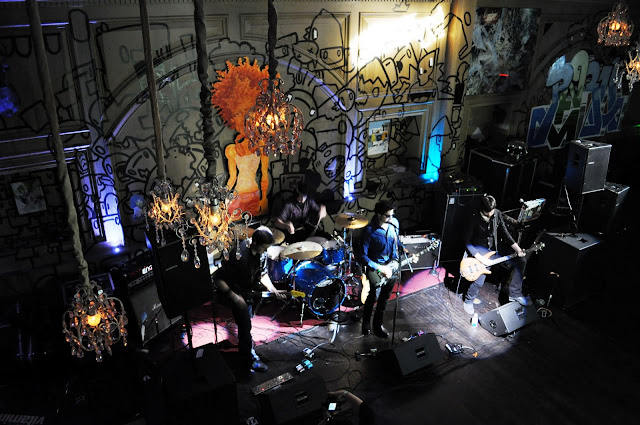 We see influences of it everywhere now, from commercials for athletic equipment and Gatorade to slick music videos by multi-platinum pop stars – the street art aesthetic. Edgy, colorful, “hard.” “Since 2000 street art is very huge and it is very lucrative,” says Shades. “Everything has an influence of street art; [like] a Mountain Dew ad with a paint splatter, it’s not really a far cry.” The subtext of street art implies street cred, which explains why youth-oriented brands like Nike and Coca-Cola have embraced it to shill their wares.

But what does it mean when street art ascends from desolate backalleys and unseen city underpasses to flashy million-dollar commercials? It means at some point, the art form gained mainstream validity. From Basquiat to Banksy, the court of public opinion has been increasingly accepting. 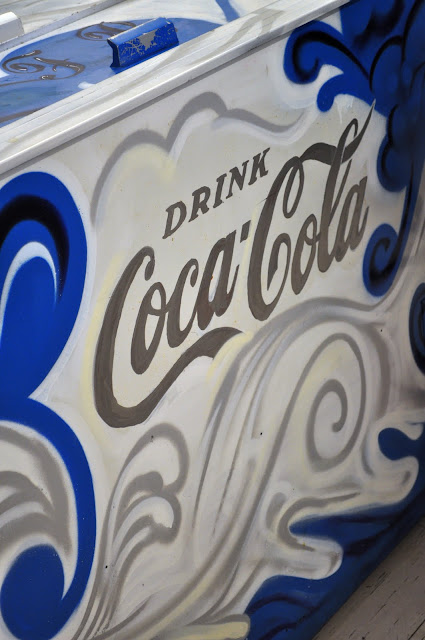 In the way that food businesses have seemed to embrace it, Shades comments that “any business is looking for something fresh and new to attract the young people … in 2011 there’s so much advertising you can’t get away from it; restaurants and other companies are looking into [street art] so they can appeal to the young audience to have longevity, to keep that fresh look, with the kids and older adults who grew up with street art. The new ‘old’ people are from that era, they can appreciate it as an art form where it wasn’t appreciated before. Ten years ago that older crew didn’t understand it and thought it was vandalism but now people now understand it and see it as art.”

Murals on the sides of buildings is nothing new in Detroit, but seeing street art’s growing visibility in professional settings in the much more buttoned-up Ann Arbor indicates a whole new relationship it has with the public. It now permeates all aspects of popular culture (to the point that it barely registers as “Street Art”).

And as what happens with most artistic and cultural movements that start out on the fringe, the mainstream has broadened to embrace it, commodify it, some may even say tame it. On the flip side, it also means street artists can now make a respectable living on it, finding legitimacy as “artists.”

But we do live in a society in which purist types are quick to accuse others of selling out. “To lose credibility then we need to look back into the ‘80s when they started putting [graffiti] in galleries,” Shades says. “If someone says it loses credibility by being in a gallery that’s BS because that’s how they know about it. The only thing it loses is that anonymity and the sake of not making money.” At some point being a starving artist starts to lose its romantic appeal in favor of being able to pay rent and have health insurance. 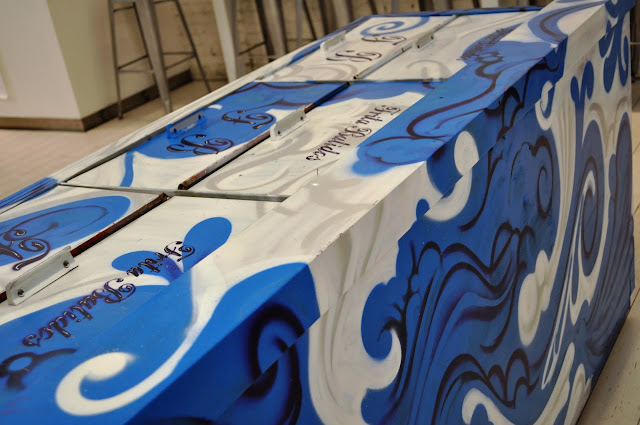 “Being a street artist is fun and it’s fun to go out there but then as you get older you have to think, how long do you want to do this?” Shades continues. “I’ve been doing this for 20 years; this is how I make my living. I’ve got to make a living somehow and I can keep going on the streets [and not make any money] or I can tailor it more to be a business and in a way that I can make a living.”

From low art to high art to widespread mass culture appeal, what it all means is that we’re seeing it show up in places like corporate-sponsored nightclubs and culinary savvy contemporary restaurants, like Frita Batido’s. “We had the need for a walk-in cooler and desperately needed cooler space,” Eve explains (the kitchen area of the restaurant is very small and they don’t have space for a walk-in). She found this vintage Coca-Cooler cooler and thought it would be perfect to put in the dining room and store all the soda inside. But because the color palette of Frita Batidos is all white – so that the flavors and colors of the food itself can pop out of the pristinely simple backdrop – Eve didn’t want the cooler to be all white too. So she contacted her friend SinTex, an up-and-coming artist and a contemporary of Shades’. 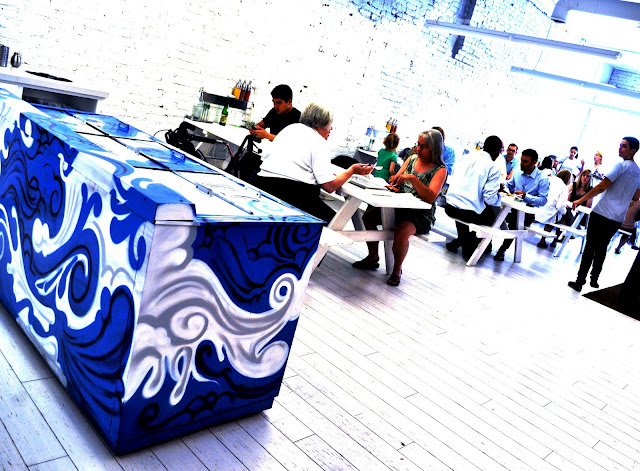 At Frita Batidos, the use of street art inside takes on its own significance. Frita Batidos is essentially styled after a Cuban street food, serving Cuban sandwiches, refreshing lime drinks served in plastic baggies with ice and a straw, and the namesake fritas (Cuban burgers) and batidos (tropical milkshakes). There is even a walk-up stand where customers can order items on the go. But while it is inspired by Cuban street food, Eve makes no claim of authenticity over Cuban cuisine. The food here is Latin-inspired but features her own fusion of local products and contemporary American techniques. What she is doing then is creating something entirely unique unto itself that is inspired by older cultural traditions. Which is why she thought SinTex’s work would fit right in.

“I thought it kind of fit in with the aesthetic but also with what we are doing here, creating something authentic in its own right,” Eve says. “Like the rest is inspired by Cuban culture but is not directly the same thing, it is its own interpretation of it. The vintage Coca-Cola cooler has a lot of history and it’s interesting to then create something original and unique in [itself].”

Since the “Foodie Movement” gained national momentum, street food isn’t quite what it used to be. Before it was the bane of a blue collar existence (like “roach coaches”), popular because it was fast, cheap and easy to eat. Often street food was associated with immigrant workers, construction crews and disenfranchised neighborhoods. And regardless of who was making it and who was buying it, the whole idea behind it was to feed people on the go, go, go. Now self-proclaimed “foodies” who wear their pat moniker like a badge of honor specifically seek out street food vendors for the promise and thrill of an authentic plebeian experience. Like street art, it started on the fringe; now much like wealthy suburban collectors snatch up their very own piece of urbanity at $10k+ per (and sometimes much more: a Banksy mural called Old Skool, now held in private collection, was estimated to be worth as much as $600,000 – and that was four years ago before Exit Through the Gift Shop introduced Banksy to Middle America), food thrill-seekers can have their fill of tripe tacos at a buck-fifty a piece.

So there seems to be a natural synergy between street food and street art, and not just because they both originated on the streets of urban areas and were co-opted into the mainstream. The public perception of both have changed dramatically; to see this collision of street food and street art inside Frita Batidos is to see the two transformed fully into their new contemporary identities in a whole new kind of authenticity, the only kind of authenticity that’s left – the authenticity of evolution.

Plus, it looks cool.