For Michiganders, "fall" means apple orchards and cider mills. We all have fond childhood memories of heading out for a day in the country to one of the old-fashioned cider mills where we would drive through the apple orchards and pick our own apples, get our faces covered in sticky caramel as we devour a huge caramel apple, drink cider straight from the gallon and eat warm fried doughnuts while sitting on a picnic table outside watching the brilliant leaves twirl through the air, then afterwards trolling through the pumpkin patches to find that perfect pumpkin to desecrate for Halloween. The urban cider mills are nice because they're convenient, but a cider mill experience is supposed to be a JOURNEY (sorry Franklin Cider Mill, but you just never quite cut it), a full day spent an hour's drive out into the country with the full-blown agricultural experience. If you can't smell horse poop and burning leaves, you're in the wrong spot. THIS is what autumn in Michigan is all about. 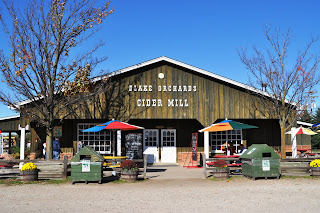 #1 Blake Orchards Cider Mill Armada
There are three Blake Farms locations, but this is the ONE. This is a full-blown farm operation with U-pick fruit all summer and fall (as well as cut-your-own Christmas trees in the winter), pumpkin patches, a huge cider mill serving hot and cold cider where you can even watch the cider being made, fresh fried doughnuts in three different flavors, an assortment of different caramel apples and blocks of homemade fudge in a rainbow of colors and flavors, a whole market full of produce and jams and other goodies, a Cafe, a petting zoo, one of those inflatable jumper-things for the kids and the grown-ups who act like kids, nighttime hay rides and bonfires, and more we're probably missing. Having been raised on the original Blake's, a huge property full of childhood adventure and things to explore, every other cider mill since has been a disappointment. This is the real deal.

UPDATE: The 10,000-square-foot Blake's Cider House and Winery is now officially open for business! It is the first cider house and winery in Southeast Michigan and uses their own apples grown on the family farm. They hope to start distributing their hard ciders next year. Blake's Ciders are available in four flavors: original, gentleman's dry, semi-sweet, and autumn apple. The cider house will be open through the holidays.

#2 Spicer Orchards Fenton
We may have a sentimental attachment to Blake's, but Spicer comes in a close second. They also have U-pick fruit all summer and fall, fresh doughnuts and cider you can watch being made as well as other treats and sundries, a particularly beautiful property full of play areas and activities for the tots (like sand art and face painting), inflatables and train rides (in a REALLY cool train) on weekends, a farm animal barn, hot kettlecorn, pig roasts, pumpkin picking, bonfire parties, a corn maze, and if ALL that wasn't enough, they also have a winery. And YOU were gonna go to Franklin. HA! Pfff.

#3 Hy's Cider Mill Romeo
It's a small operation but you can still pick your own apples, and those metro Detroiters most in the know agree that Hy's has the BEST cider, and that's reason enough to visit. The store is also particularly cute and quaint in that country kind of way.


#4 Diehl's Orchard and Cider Mill Holly
Diehl's is yet another adventure destination orchard and cider mill. Take a private tour of the facility during the week, enjoy dinner and an evening hayride followed by a campfire, or take a daytime hayride through the orchard and pumpkin patch (great for groups). There are tons of weekend activities for the kids (hay piles and pony rides; you can even see their turkeys in the birdhouse), and don't miss their annual Ciderfest every year to kick off cider season with a Fun Run and craft show.

#5 Yates Cider Mill Rochester Hills
Yates isn't quite out in the far-flung country, but it's also not a quick stop en route from West Bloomfield to Somerset Mall, either (poor Franklin keeps getting picked on). They have a cider mill, a fudge shop and an ice cream store; there are no orchards to wander or fruit to pick, but there is a cute little river walk with a swinging bridge and there are also pony rides and a petting zoo for the kids. If you have the cider mill itch but can't quite spare a full day to spend out in the country, Yates will scratch 'ya just fine.

UPDATE: Honorable Mention - Paint Creek Cider Mill Oakland Township
Previously not included on this list because they were not in fact really a mill, Paint Creek has since expanded their operations to be open year-round with an expanded food menu including weekend barbecues, and now also produce their own craft sodas AND started pressing their own cider for the first time ever this year.

UPDATE: Honorable Mention - Miller's Big Red Orchards Washington Township
In addition to selling fresh baked goods made from scratch daily in their expanded bakery and fresh cider made from their own apples, Miller's also offers U-pick apple and pumpkin picking, a petting zoo, and a corn maze. Miller's is also getting licensed to open a brewery and winery next year and will even produce spirits. Their farm store sells a variety of organic produce and produce from area farms year-round.

Want to see more? Check out the Flickr set here.