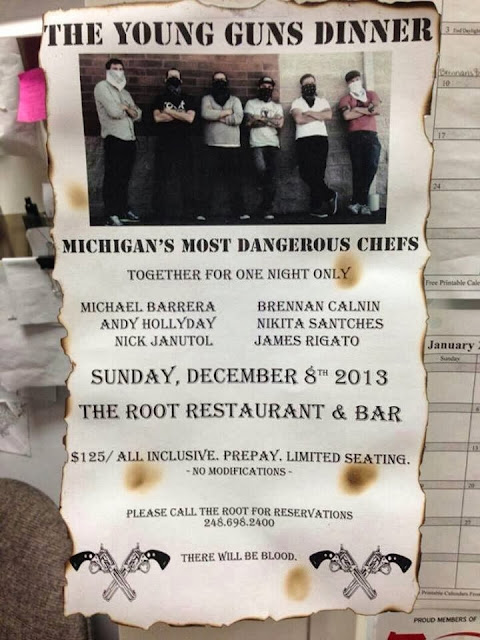 Who are the most dangerous chefs in Michigan? Find out on December 8 as the Root Restaurant + Bar in White Lake hosts a special Young Guns Dinner with six of Michigan's up-and-coming chefs.

Each chef will oversee one of six courses but menus will NOT be posted prior to the event. The Root's Executive Chef James Rigato, who organized this event, says, "Expect some edgy, lawless cuisine and beverage." (But take it from your HBIC, it's going to be good, and also not really super vegetarian-friendly so you guys might want to sit this one out. Unless you're cool with skipping most of the courses.)

This event is Sunday, December 8 at 7 p.m. at the Root in White Lake. Tickets are $125 per person is all-inclusive with whiskey, wine and beer pairings. Evan Barrett of the Madeline Triffon Plum Market wine team is the guest Young Gun Sommelier of the evening.

Word was leaked early today and the restaurant is already receiving a barrage of phone calls for reservations. Don't miss out!
Posted by Unknown
Email ThisBlogThis!Share to TwitterShare to FacebookShare to Pinterest