[EID Feature] I Dream of GC with the Sharp Gruyere: Cheese Dream Gets Ready to Open


Are food trucks "over"? Not by a long shot. In fact, in greater metro Detroit they've only just begun. Detroit's El Guapo made headlines for its much-touted 60 trips to City Hall just to get the proper permits; recent food truck meet-ups in Eastern Market and the Royal Oak Farmers Market packed crowds to capacity with two-plus-hour wait times for tacos; and Mark's Carts in Ann Arbor was lauded for introducing a whole new kind of business model to Southeastern Michigan. (For my own little exposé series on metro Detroit's food truck scene, see here and here.)

As food truck fever hit the streets of America in the last several years, metro Detroit is finally getting up to speed. 2011 saw several high-profile ventures launch (including those listed above), and 2012 will see even more. One of which will be Cheese Dream.

Cheese Dream is a partnership between Jordan Ceresnie and Afrim Ramaxhiku. The two met while working together at Zingerman's Roadhouse, but both have equally fascinating (if drastically different) life stories. Ramaxhiku grew up in war-torn Kosovo; Ceresnie is the progeny of iconic metro Detroit furriers Ceresnie and Offen Furs. "It's funny - he's a Muslim [from Kosovo] and I'm a Jew from suburban Detroit. That we're collaborating on this is pretty cool." Both have worked in Michelin-rated restaurants - Ceresnie all over the country and Ramaxhiku all over the world.

Ceresnie always knew he wanted to be a chef. He started in his first "real" kitchen at age 17, then at 19 he moved to California and attended the Napa Valley Cooking School. He started working for Thomas Keller in Bouchon Bakery, then later moved to L.A. for an internship and worked at the now-shuttered Sona. Ceresnie was part of both teams when they received their first Michelin stars. "It's cool to cook at the top and be able to compete with the best chefs," he says. 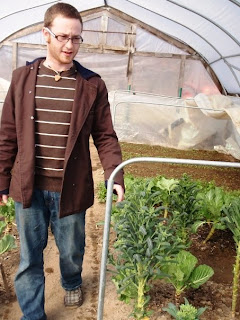 While he was living in California he started his own garden. "You can grow anything in California," he states. "I started to become interested in where the food I cook in the kitchen comes from." When he moved back to Michigan, he enrolled in Michigan State University's organic farming program. "I really dove into organic food production and what it's all about." When he graduated, Zingerman's Roadhouse seemed like a perfect fit for him. "They have an organic farm and a restaurant where they use those products."

Despite his culinary pedigree, Ceresnie's passion has always been in comfort foods. "I grew up with the typical American comfort food, mac and cheese, nothing gourmet ... those are the kinds of foods that make me feel good." When he and Ramaxhiku were discussing their business concept they originally thought of having a wood-fired pizza cart (Ramaxhiku had opened a wood-fired pizzeria in Kosovo previously). Finally they decided, "Let's just do grilled cheese." "I guess whatever we're doing we want it to have something to do with bread and cheese," Ceresnie explains. "It's a staple of life. If you have bread and cheese, it's a meal."

"Who doesn't like it?" Ceresnie continues. "We take it from American cheese and Wonderbread and go beyond that. It was a blank canvas for us. Almost any meal or dish you can think of can be turned into a grilled cheese sandwich." They want to use artisan cheeses and local produce and products as much as possible, and also work with local food vendors and processors. The partners recognize how critical buying local is to the health of the economy and the community. 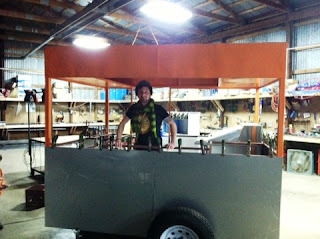 Cheese Dream is not fully functioning yet, but the cart itself (more of a trailer that can be hitched to a truck) is done and they are already signed up to be a part of Mark's Carts food cart corral when it reopens for the season in April. In the meantime, they've been doing test markets in Chicago and even visited the long-running Grilled Cheese Invitational in L.A., which they hope to compete in next year. They chose to stay in Ann Arbor because of their relationship with the community there already. "There's a tight community in Ann Arbor that's very supportive," Ceresnie says. "It has always been a progressive city ... Ann Arbor is really nurturing to new business ideas, and the idea of Mark's Carts is really cool too."

Right now, they're working on their recipes, and you bet you can expect some truly gourmet spins on this childhood classic. "Right now we have a play on French onion soup. It has rich, beefy caramelized onions with gruyere cheese; it's all the flavor components of French onion soup on a grilled cheese sandwich." (FOS!!!) They are also going to have the classic American cheese variety on challah bread from Dakota Bread Company in West Bloomfield, their bread of choice for all their GC sammies. "I chose it because being from a Jewish background I ate a lot of challah," Ceresnie says. "It's amazing by itself; on grilled cheese it can only be better."


Some other grilled cheese variations include the Beastie, which is basically a BLT "with a lot of cheddar." And without even realizing it at first, they found themselves trying to approach different flavor profiles from around the world. "You can take a tour of the world through [grilled cheese] sandwiches!" An Italian-inspired sandwich features hand-pulled mozzarella which they make themselves with roasted tomato and olive tapenade. A Mexican-inspired creation features green chiles with cilantro, lime and Monterrey Jack cheese. They also want to have one based on an ingredient from where Ramaxhiku grew up called ajvar (a red pepper and eggplant spread) with feta cheese. 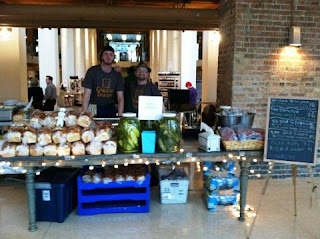 While a future traditional brick and mortar restaurant is not out of the question, for right now starting with the cart just makes economical sense. "There are lower overhead costs and greater ease of starting up versus a brick and mortar location," Ceresnie explains. "We also have the flexibility to not HAVE to be at one spot all the time." While Cheese Dream will primarily be at Mark's Carts this season, they have a greater vision of traveling to farmers markets and events "going to where the people already are rather than waiting for them to come to us."

Ceresnie sees a sort of renaissance happening in food trucks right now. "We're going from junky mass-produced food to artisan food," he says. "Just through watching TV and traveling, I'm seeing this trend of the classically-trained chef going back to the basics and back to comfort food, doing one thing and doing it really well." 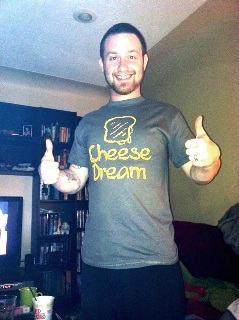 Through this experience, Ceresnie has reconnected with old friends he hasn't seen in years, people like him who have a passion and the guts to go off and start their own business. One of them owns a screenprinting business in Detroit and is making all their T-shirts; another does vinyl graphics and is making the decals for the cart. "You know you're on the right path when everything falls into place [like that]," he says. "I'm really excited about doing grilled cheese but more than that I'm really excited [to be surrounded by] like-minded entrepreneurs. We're kind of a rare breed but where there's one there's usually more."
Posted by Unknown
Email ThisBlogThis!Share to TwitterShare to FacebookShare to Pinterest