As much as chef-partner Rick Halberg tries to underplay the cuisine at Local Kitchen + Bar as "everyday food," avoiding the word "comfort" since upscale comfort food is all the culinary rage right now (particularly in this region), Local is quintessentially American, and there's no shame in that game.

Local celebrates Americana in a way that is appropriately fashionable for Ferndale. Partners Rick Halberg and Brian Siegel are both long-time area restaurateurs, and while Local has been on the lips of food bloggers hungry for bloggy buzz for some time now, they’ve taken the time to do things right. (Which is another way of saying it’s taken a lot longer than initially planned/announced, but that’s hardly news in the restaurant industry. See also: Astro, Sugar House, Green Dot, etc.) 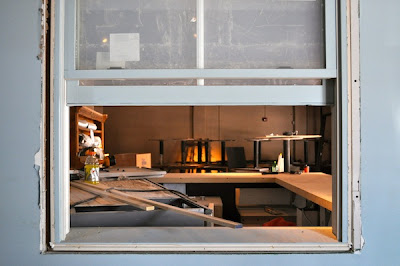 Rick has been out of the restaurant industry for six years now and has been "dying to get back in." "We wanted to do a neighborhood place to eat that was really for the community," he explains. "We found this space and it seemed to fit perfectly with our partnership," referring to Local's relationship with event planning company Star Trax, which will be responsible for much of the booking in the sizable event space upstairs (where Via Nove used to throw techno parties, only this time it will be more like weddings, showers, bar/batmitzvahs, etc.).

The concept for Local is "to do a restaurant that is for everyone ... everybody's doing comfort food; we're trying to shy away from that package. It's really just about everyday food prepared extraordinarily well. We really want to focus on the community." The word "local" of course signifies a commitment to the use of locally-sourced ingredients and local suppliers (as much as possible) including Michigan beers and wines, working with local artisan food producers like Corridor Sausage, sourcing from Michigan farms, and even having their own share in the Ferndale community farm. "We want to do [this] the best way we can and offer product[s] that [are] accessible to as many people as possible."


So what might "everyday foods" with a local emphasis look like? Chicken-fried chicken. Mac and cheese. Burgers. A pig platter with various different pork presentations. "Super fresh" fish. Hearty salads. And just about everything made from scratch in their kitchen, including honest-to-goodness American desserts like seasonal pies, cobblers, Devil's Food Cake, and other "bake sale items" (like brownies and Rice Krispies treats) that will be on display in their vintage rotating dessert display. Oh, and POUTINE. The focus is all on "super fresh, super clean" food, and not fancy presentations.

As a long-time chef and restaurateur himself, Local marks a return to form for Rick. A graduate of the CIA back in the '70s (when "it was just getting cool to be a chef"), Rick jokes he was "on the cutting edge of cool for one moment in my life." He had earlier endeavors in West Bloomfield and Birmingham, but his crowning achievement thus far was Emily's in Northville, which offered extremely high-end dining that at one point held the highest Zagat food rating in the United States (a 28 on a scale of 30, a ranking Emily's shared with only a few other restaurants in the country). 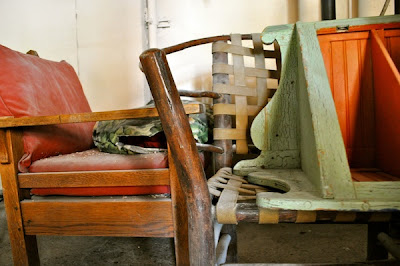 Diners remember the Emily's name and are excited to see the new concept emerge. As for Rick, while he will still be working as a chef in his restaurant (a chef's table in the kitchen with seating for 8-10 guests will be personally attended to by Rick himself), he has built up an impressive team of culinary talent including sous chefs Ricky McCormick, formerly of Cafe Muse, and Nick Schultz, who will be weekend moonlighting with Brew Jus. "It's really exciting to me to have the opportunity to influence another group of young cooks and chefs," Rick says. "It's kind of a nice reward for me to be able to do that." And he adds, "I'm very focused on quality and service. We're not going to slip at all here."

Diners can look forward to weekly specials, a late-night menu, a bar menu, craft cocktails, craft sodas and more. But one thing that might steal the thunder from the food is the fabulous indoor/outdoor patio with a towering wood-burning fireplace as the centerpiece. "We'll really have a 12-month feel to the patio," Rick notes, half of which will be closed off in the winter months so guests can still cozy up around the fireplace for cocktailing and dining. 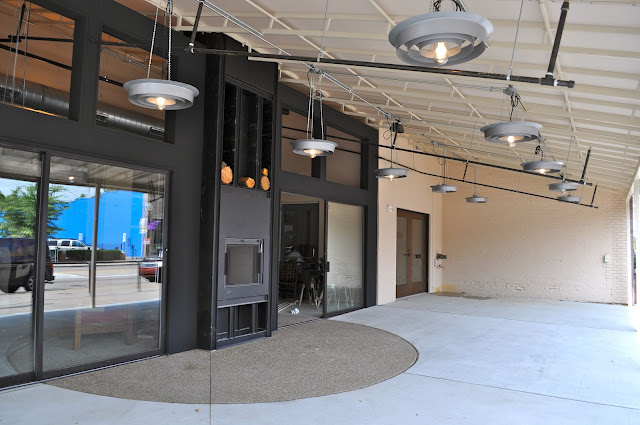 The space, designed by none other than Ron Rea (a longtime friend of Rick's and Brian's), has a cozy Americana feel to it: wicker furniture on the indoor/outdoor patio, vintage pieces Rick has collected over time (including an antique hutch from an estate sale), an old park bench, stools that look like they came straight from a high school chem lab. The palette is soft and suits the stylish-yet-homey motif, like something you might find in the pages of Country Living. Where the trendy upscale comfort foot joints are universally gunning for urban-rustic, Local brings with it a certain bit of southern gentility, classic country without being corny. "Brian and I both had a very specific image in mind," Rick says. "We wanted it to be super-casual, not over-designed in any way. We wanted to have a lot of integrity in the feeling of this place. Ron's great like that."

The building itself used to be a gas station “a zillion years ago.” Part of the design aesthetic was to strip it down to some of the more iconic design elements, like the original wooden beams in the ceiling and the original brickwork. A communal table built of reclaimed wood will separate the bar from the dining room space. "Our space will be truly iconic for the neighborhood," Rick states. "Our food and service will be excellent, and our commitment to hospitality will be second to none."