Shawn and Sean of Child Bite have big, beautiful beards. They are the beards of road warriors, and they have conquered many a road.

These guys aren't the phone-it-in, "I'm in a Detroit band" types who play the occasional gig when it suits them. These guys tour, and they tour hard - relying on the kindness of fans and strangers to put them (and their beards) up for the night while they're on the road. "I don't ever want to have regrets in life," says Shawn Knight, referring to the crazy life experiences they have while traveling -- not "crazy" like strippers and blow (though they've heard and can repeat their share of those stories), but more just ... random. Random and weird and wonderful.

I meet Shawn and Sean at the Emory for some pre-DIY Street Fair food and fun. We originally planned that they would order off the children's menu (get it? "child" "bite"?), only to discover the Emory doesn't actually have one. Crazy that a bar doesn't have a kids' menu, but I digress. Shawn and Sean may have some truly majestic facial hair (Shawn's, left, is 10 months old; Sean Clancy's, right, is 6 months), but they also have some wonderfully random stories from the road. Like that time they drove to Alaska for the World Beard and Moustache Championships. True story.

"We did a five-week tour to Alaska," Sean explains. "We were officially members of Beard Team U.S.A., representing the United States in the 'Beard' category." Sean spent about $2,000 on van repairs before they set out on this excursion, only to have that same van break down on them two days into it in Chicago. But since they had already made the commitment to play several shows on the route and had put so much work into making it happen, they decided they needed to see it through to the end, no matter what. Every dollar they had went into renting other vans -- the one with all their equipment had to be left state-side, so they also had to rent another van in Canada plus equipment once in Anchorage. On and on it went but they got there and they played, and they both went home with 4th place ... which is what everyone gets but who cares, how many of you represented America in an international beard competition? I certainly haven't.


"Really it's kind of a dog show, you're on the runway and you have a number," Sean explains. It could be said that they were doing the whole "beard thing" before it was cool, growing "tour beards" while on the road because, well, it's just easier than shaving. The beard thing is serious business, too: I joke about them getting sloppy with some milkshakes but no-can-do. As Sean explains:

"Ice cream and frosting and things of that nature, when they get into your beard or your moustache they stick, no matter how many times you try washing it out. It grows a very foul odor. It’s just something I’ve experienced." He says that no amount of soap or scrubbing helps. "I wash my beard more than any other part of my body. Like, I’m so paranoid about it. … it couldn’t get any closer to my face. It’s a part of me!"

Okay, so no smashed cake and dripping ice cream photos, got it. But being the road warriors that they are, they've also had some solid food adventures.

At Voodoo Doughnut in Portland they got a donut that was later shut down by the FDA for having a Dimetapp glaze. (They also got a "King Dong" there, which is exactly what it sounds like in donut form. "We were eating it for, like, three days," Sean says.) In Waterloo, Ontario, Granny Bonn's is "in this weird shitty strip mall and looks like a high school cafeteria inside." It's also an Asian-owned fish and chips place. "It's the best food I've had..." Sean trails off. "I think about it all the time. It was fucking awesome." Shawn adds, "We felt like we were in a Chinese restaurant but they served fish and chips." 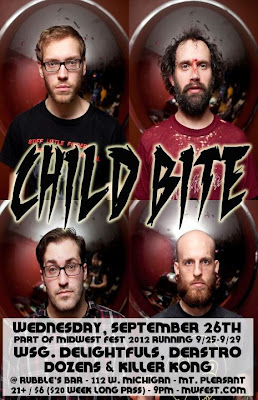 Sean swears by metal bar/burger joint Kuma's Corner in Chicago (one of the country's most famous burgers at the moment). "I waited two and a half hours in line for a burger there. They make their own ketchup that's, like, salsa ketchup and super delicious, plus the waffle fries and the pretzel bun... I got the YOB [named after a metal band] and it was awesome, and they fucking played awesome metal music."

They also discovered "313 Detroit-style pizza" at a pizza shack in Austin, Texas while playing SXSW. "I love pizza," Sean says. "Whenever we’re out of town I think about pizza. Michigan has really good pizza but not a lot of places do ... that 313 pizza was like Buddy’s or Jet’s ... I’ve never seen that [Detroit-style deep dish] pizza anywhere besides Detroit and now this shack in Austin." If you're ever in Milwaukee, Palomino Bar and Restaurant has a large selection of vegetarian and vegan options and offers large portions for low prices. Sean says, "Milwaukee is very into the local beers and local food. They don’t really have a lot of bullshit."

But the question burning on Detroiters' lips of course is -- WHAT ABOUT US???

Shawn and Sean both dig Green Dot Stables for the funky sliders (like catfish, and duck, and lamb) and Christine's Cuisine in Ferndale for items like the "Burrito Bomb." Sean sings the praises of Slows' sandwiches. Shawn likes Hot Taco right down to its inconsistencies ("I like that when different people are working there it tastes different"), and Sean can't get enough of the New York Red Hots coney island in Madison Heights. "It has the same menu every other fucking coney island has, but the chicken fingers pita and the Reuben," he pauses for emphasis. "The food is delicious there and no one's ever in there and it's open 24 hours." Unlike other coney islands that are swarmed with "drunk assholes" as soon as the bars release them to the public, "There's, like, literally no one ever there, EVER."

Naturally the $5 burger-and-beer combo and the Emory every Tuesday is one of their top picks (Sean recommends you get a side of the creamy Italian dressing and put it on the burger), as is the ever-popular Treat Dreams in Ferndale (Passalacqua are also fans) and their ever-popular Sunday Breakfast ice cream (with bacon). (For the record, if Child Bite were an ice cream flavor it would be chocolate-orange, inspired from an experimental "float night" they once had on tour when they made a float with chocolate ice cream and orange soda.)

As for the other question burning on Detroiters' lips -- how does Child Bite keep their beards so "full"? -- the answer is, "Children, duh." "Young babies." "The whole idea behind the band is hiding in plain sight." "We eat kids." Just call them Child Swallow.

Child Bite plays the McClure's Stage at the DIY Street Fair Saturday at 11:15 p.m.
Posted by Unknown
Email ThisBlogThis!Share to TwitterShare to FacebookShare to Pinterest