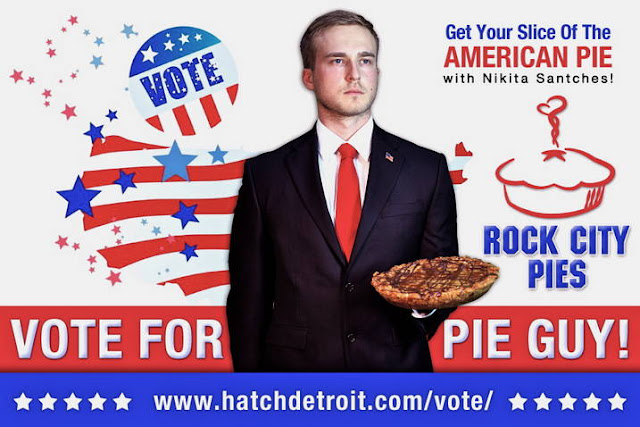 The first time I met Nikita Santches was at his Rock City Pies booth at the Rust Belt Market. I saw a pie that looked like white chocolate mixed with children's cereal called something like "White Trash Pie" and dared to inquire.

"What's in that?" I asked, pointing to the colorful pie encased in a glass stand.

"Are you asking because you're just being curious or are you actually going to buy something?" Then he flashed a shit-wit grin.

I liked him immediately.

Now my dear friend Nikita, known by some as "the whippersnapper" but to most as the Pie Guy, is a semi-finalist in this year's Hatch Detroit contest. If you're not familiar with Hatch, it's basically Detroit's version of prom only the king/queen also gets $50,000 to start a business.

Nikita (really he goes by Nik but Nikita is such a fantastic name, no?) has some tough competition, particularly in Tashmoo Biergarten which has already operated a full season (with an additional one-off weekend this past May) and has benefitted from a tremendous amount of press coverage, visibility and a strong social following that has been built over the past year and a half. (Really, for each of the other nine semi-finalists of this year's Hatch, this is going to be the one to beat).

So it's time you get to know Nikita. The first thing you need to know about Nikita is that, like all truly ambitious people, he hates waiting. Last fall Hour Detroit reported that he had some investors lined up and would be opening his own restaurant. Earlier this year I followed up with a story in Metromode about Nikita's progress and plans. But over the past year, little progress has been made as his business plans have been tied up by a cadre of lawyers on behalf of his investors and Bedrock Investments -- yep, Detroit's White Knight Dan Gilbert. And, like all truly ambitious people, Nikita finally said, "Fuck it, I'll just do it myself."

It's that exact "fuck it, I'll just do it myself" mentality that endears him to me. (I, too, hate waiting.) A tireless work ethic and a staunch refusal to stand idly by and wait for something to happen is embedded in Nikita's DNA.

Nikita grew up in Russia ("Mother Russia," he jokes) and moved to the States when he was 12. As a child he lived in a house in the woods and remembers going to the market and buying milk so fresh it was still warm, picking mushrooms and peas and eating them for dinner, eating fresh strawberries straight from the plant, Grandma in the kitchen making pickles and vodka. "Everything was very simple," he says. "You could drop me into the middle of the woods in Russia right now and I would survive!"


This rustic upbringing very much informs his cooking now, as does his self-styled culinary education in nursing home and elementary school kitchens.

He remembers now making "bread pizzas" when he was four years old, but it was never in his mind to cook for a living. A very physically active person, he was really into sports and thought something like a physical therapist would make sense as a career choice. But in his senior year of high school he needed an extra credit and an advisor told him to take a cooking class because "it's a blow-off." In this class they made breakfast and learned how to decorate cakes, then a recruiter from a culinary school made efforts to recruit Nikita.

It would be lovely to say that this class was the catalyst for a life-long love affair with cooking for Nikita, but it wasn't. His response to the recruiter's efforts was, "Fuck this, I'm not into this, I don't want to be a cook." (Hey, some of us need to come into things on our own terms.)

Then school ended. And Nikita had no opportunities in sports. And he needed to work. So he got a job as a dishwasher and developed a good relationship with the chefs, and if someone didn't show up for a shift Nikita would be right there saying, "Alright, I'll help out, I'll peel potatoes." He got his foot in the door of the kitchen and started doing prep work.

He worked under a woman named Mary at an assisted living facility. He describes Mary as "an old black lady from Alabama who worked at this place for 45 or 50 years and was set in her ways." Their kitchen would frequently have to put on "fancy private dinners," and Mary didn't want to do "the fancy BS" so she let Nikita take the reins. He had a lot of leeway to experiment and try different things, and eventually was promoted to Executive Chef with the full responsibility of the kitchen, also becoming Mary's boss. "I miss her dearly," he says. "She knew her shit."

But it was a very corporate environment that he was working in, and he soon realized that being "the boss" in a corporate-run kitchen was something he adamantly didn't want. "As I'm getting older I realize how shitty it is," he explains. "I'm in this position where I'm the boss, I have to cut jobs, I have to fire people. I have to go to Mary and say, 'I'm sorry Mary, I have to cut your hours because the fucking asshole CEO needs his bonus.' The whole thing really turned me off from it. Before I was really passionate, working 16 hours a day seven days a week. For the last year I was there I didn't give a fuck anymore. I thought, 'You're all assholes. I'm being used to make money for this huge conglomerate.' So I decided I'm going to have to do my own thing and start my own catering company."

So he did. Now he caters for private schools grades K-8 in Oakland County, in addition to being the Pie Guy of Rust Belt Market. But he's not one to rest so easily.

"About two years ago I got an idea to do a modern American restaurant ... now it's what everyone's doing," he says with a bit of disdain. (Yep, I hate when that happens.) But for him, it's what he's been doing for years. "I was doing it there [at the nursing home] -- comfort food, very basic. It was all old ladies there, that's what they liked!"

Rock City Pies was kind of a happy accident. When the Rust Belt Market opened last year, he approached owner Tiffany Best about doing some food inside. At the time they could only sell baked goods, and so Rock City Pies was born. Flash forward to now, after more than a year of working on his own restaurant concept -- writing the business plan, working on menus, looking at buildings, dealing with lawyers and investors -- Nikita is anxious to move forward.

Rock City Pies (the restaurant) will certainly be pie-oriented, but not just the pie you eat for dessert. Think gourmet pizza (pizza is a pie!) and pocket pies with fillings like pork carnitas with sweet potato, lime and beans, and braised pork shoulder with fennel and potato. He'll have a salad bar with "cool lettuces" and as much local and seasonal produce as possible. He'll also source from local purveyors for items like coffee and whatever else he doesn't make himself (which will be the bulk). And yes, there will be plenty of pies for dessert (and also bread pudding because that's his favorite).

"I want this to be an all-American place," he says. "I'll take traditional items and do them differently, use different items and techniques, so when you get something it's familiar but different. [I don't want to do] the same boring thing everyone else is doing and just repeat what everyone else has done. It's a fine balance between doing something new and cool and having some basic traditional items." And you can see that mentality even now in his pies, with flavors like his best-selling salted caramel apple and funkier favorites like smoked apple whiskey.

Would it be cheesy to say Nikita is living his American dream? Fuck it, I'm going there. Americans tend to forget that people come to America because it is the land of opportunity -- that in fact it is not just a twee trope. And Nikita isn't one to waste an opportunity.

He's also a shit-wit, hence the "presidential" Hatch campaign. Hey, it's really all just a popularity contest, is it not? (And I assure you he does smile. And also blush. Like a beet.) Russian Born. American Made. A vote for Nikita Santches is a vote for #AMERICA. 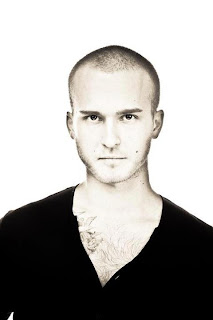 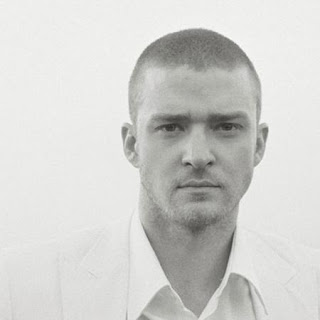