In Dearborn, there are plenty of places to get a good burger. There's Miller's Bar, which Food and Wine just ranked among the top 25 burgers in the country. Then there's Howell's Bar, which anybody whose anybody knows has a better burger than Miller's (some girls just get ALL the attention; what can you do?). The Biergarten also gives gimmicky Miller's a run for its meat. And now, there's iBurger.

iBurger Lounge is the new kid on the block. It opened about a year and a half ago in the West Village Commons. Everything they serve is homemade, organic and halal-certified, in response to the dietary needs of the area's Muslim population. For your reference, a McDonald's restaurant began serving a halal version of its Chicken McNuggets in Dearborn in 2000. Sales were so strong that they expanded the offering to a second Dearborn location, and later to select stores in the U.K. and Australia. When such a significant number of the population requires such specific dietary needs, even the world's largest hamburger fast food chain pays attention, which just begs the question - why did a place like iBurger take so long? 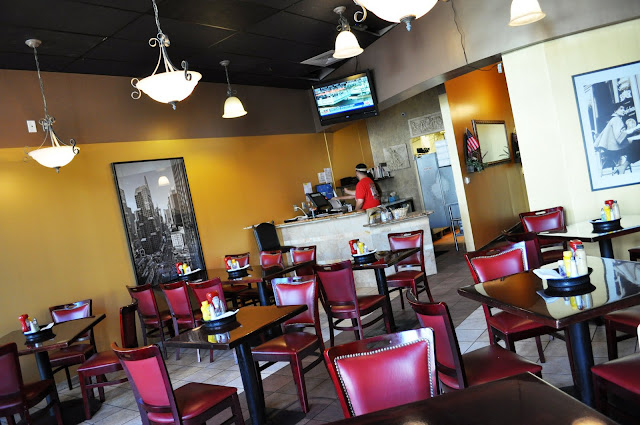 Owners Hassan Aoun and Houssam Aoude decided to open iBurger - a burger joint in a city with an already disproportionate number of burger joints - so that the area's Muslim clientele could enjoy this classic American food too. Manager Mariam notes that, despite the popularity of places like Miller's et.al., the Arabic (specifically Muslim) community did not have something like that for themselves - most of the halal restaurants serve Arabic food, with very little variety.

But iBurger isn't JUST a halal burger joint. They serve gourmet certified Angus beef burgers; a leaner, juicier beef. "This is something new," Mariam says. "We're offering something entirely different to the area." Their burgers are also less wax-paper-and-ketchup and more gouda-and-arugula. They have 15 signature burgers, like the "Pesto" with tomato, onion, fresh mozzarella, homemade pesto dressing and arugula; and the "Boss," made with two half-pound steak patties, cheddar cheese, beef bacon (Islamic law forbids pork consumption), golden onions, tomato and shredded lettuce. The buns are all firm, hearty artisanal buns. The rest of the menu is rounded out with a large selection of salads, wraps, paninis, classic appetizers, and gourmet thin crust pizzas (try the Filet Mignon pizza, a house specialty).

Phase 2 of iBurger Lounge will be opening in September. The restaurant will expand with more seating in a more comfortable, lounge-like atmosphere, and will have a raw juice bar, a full ice cream shop, and will also offer their full menu and homemade desserts.

Because it is a halal restaurant, they do not have a liquor license nor will they apply for one. They are, however, open seven days a week from 11 a.m. to 12 a.m. (3 a.m. on Fridays and Saturdays), so this is a great place to grab a bite to eat after a night out, or just hang out with some friends for a late afternoon lunch on the patio.