If you ask any native New Yorker (if there is such a thing), they've probably never been to the top of the Empire State Building. The thing is, when you live in a place, you tend not to look at it with the wide-eyed wonderment of your average tourist. And that's a shame, really: metro Detroiters will dump thousands of dollars on plane tickets to France, cooking classes in Burgundy, guided wine tours through Bordeaux, butler-tended lodgings in centuries-old chateaus ... and they'll spend just as much to get shuffled like cattle through Napa Valley.

But just four(-ish) hours to the northwest there's Traverse City, a cosmopolitan community in the middle of farmland that's been getting some serious national attention lately. And on either side of Traverse City along the shoreline of Grand Traverse Bay lies the best of Michigan wine country.

There are several wine trails in the state of Michigan, but this northwestern corner (comprised of the Leelanau and Old Mission Peninsulas) is cranking out the wines that are making a strong name for Michigan in the world market. Next time you want to book a romantic getaway to wine country, look no further than your own backyard.

#2 L. Mawby Vineyards Leelanau Peninsula
There isn't a winemaker in Michigan who doesn't think Larry Mawby is a genius. He makes sparkling wines and ONLY sparkling wines, and was really the first person in Michigan to not only say it can be done, but that it can be done REALLY freaking well. He's been proving his point with both estate-grown and outside-sourced grapes since 1978 using 100% Pinot Noir and Vignoles varietals as well as blends under two distinct labels.
Wine rec: Talismon; Blanc de Blancs 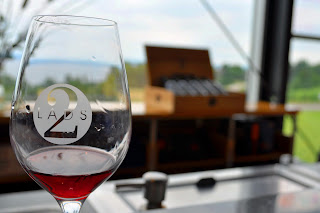 #3 2 Lads Winery Old Mission Peninsula
The newest of the seven wineries currently operating on Old Mission Peninsula, 2 Lads Winery is an ultra-chic modern/industrial winery and tasting room that specializes specifically in cool climate reds and sparkling wines. The "two lads" - winemaker Cornel Olivier and operations manager Chris Baldyga - both believe that Michigan's wines can be on par even with Bordeaux's (both wine regions rest of the 45th parallel). They designed a facility to maximize their estate-grown grapes' potential with a much gentler and environmentally-friendly gravity-flow system, but what you'll care most about is the stunning view of the vineyards and East Grand Traverse Bay from the tasting room.
Wine rec: Cabernet Franc Merlot; Cabernet Franc Rosé

#4 Bowers Harbor Vineyard Old Mission Peninsula
Bowers Harbor Vineyard has a totally chilled-out vibe and family feel. It could be because proprietor Spencer Stegenga refers to one of his employees as his "Director of Bro-motions," or because the award-winning Erica Vineyard was named for his wife on the plot of land where he proposed to her, or maybe because the family dog Brix is always running around waiting to be petted by the nearest friendly hand. Regardless, this is a fun place to hang out on the patio, chat with the staff, even Dine in the Vines (dates throughout the summer). And they're also kicking out some truly outstanding reds.
Wine rec: Erica Vineyard Cabernet Franc; 2896 Langley Meritage

#5 Shady Lane Cellars Leelanau Peninsula
This may not be one of the best-known wineries in the area, but with just over 52 acres of vineyards they aren't exactly small, and connoisseurs already know the name well. Shady Lane is considered one of the best wineries in Michigan for their delicate wines that elegantly represent their land. They are known specifically for their dry Riesling (this is Riesling country, after all), but in keeping with the apparent overall theme of "Michigan Reds Rock" here, their Blue Franc is a unique beast of dark berries and spice and they are one of only two area vineyards producing this varietal.
Wine rec: Dry Riesling; Blue Franc