"Flash back to 15 years ago: before the casinos, before Comerica Park, before Campus Martius, before the Westin Book-Cadillac renovation, before the Super Bowl, before the greenways and riverwalks, before OMG SLOWS ... Detroit was a very different place. People who make 'Wild West' jokes now obviously didn't see it in the '80s and '90s before hipster artists and the New York Times 'discovered' the city. The Town Pump hails from that era, and owner Sean Harrington remembers. 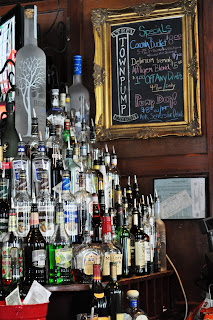 ''Back then, this was one of the only hangouts in town!' he jokes, but he's not really kidding. The Town Pump opened 17 years ago. At that time, people hung out here, at the original Honest John's by Belle Isle, at Union Street and the Majestic. The original 3rd Street Saloon was a favorite hangout for college students for their notoriously lackadaisical attitude towards checking IDs, the Old Miami was full of crazy old war vets and little else, and then there were the bars of Hamtramck ... which were pretty much all the same bars as now with one major difference: Motor. 'We've been here doing this and promoting Detroit for a long time, before it was cool,' he says..."

Read the rest of the story here.