The Spanish coffee is one of those holdover dessert drinks from the Reagan Era of steakhouse sovereignty. While once the grande dames of dining, these places are now mostly houses of old people food (though the "classic" steakhouse certainly seems to be coming back into vogue as of late). While other dessert drinks (like the ice cream-based Hummer) have been mostly relegated to the realm of revived steakhouses and horrible national chains with apostrophes in their names, the Spanish coffee has managed to attain a certain level of credibility, even amongst the craft cocktail crowd. Part nouveau trendy, part nostalgic throwback, the Spanish coffee is simply a lovely winter warmer and always will be. The places you'll find it are as varied as the recipes they use, but certain things are consistent: coffee, whipped cream, sugar rim, booze (usually coffee liqueur, brandy, rum, or any combination thereof).

#1 Tom's Oyster Bar (Royal Oak)
The secret to an excellent Spanish coffee is Tia Maria, a vanilla-infused Jamaican coffee liqueur. For many years, Tom's was widely renowned across metro Detroit for having the best Spanish coffee EVAH. This was because of Tia Maria. Then Tia Maria was suddenly and inexplicably unavailable in Michigan for a hot second (sometime in/around 2010-ish), and people took notice: Tom's Spanish coffee simply wasn't what it used to be. But then! Tia Maria just as suddenly and inexplicably became available in Michigan again (because the MLCC is awesome and is obviously a rational and consistent entity) and now Tom's Spanish coffee is just as awesome as ever. And not just because they set it on fire. But a little bit because of that.

#2 London Chop House (Detroit)
This is one of those recently-revived steakhouses of sovereignty but done so impeccably well (provided one can appreciate such painstaking throwback) that you just have to sit back (in the plush red leather booths) and enjoy the point at which historic preservation, well-funded nostalgia, museum-like reverence, and unapologetically untrendy classic steakhouse cuisine collide. The Spanish coffee is about half rich, creamy homemade whipped cream and half booze with a dash of coffee for warmth and color. With a lounge singer crooning hits from the Great American Songbook and a belly full of oysters and steak and starch and heavy cream sauces, it's hard not to get into the spirit of the place. The Spanish coffee is a perfect ending to a meal that is, by necessity, already over the top (and there's probably enough calories in that whipped cream alone to fully replace an actual dessert). They also serve that classic Hummer concoction, which they made famous back in the diz. 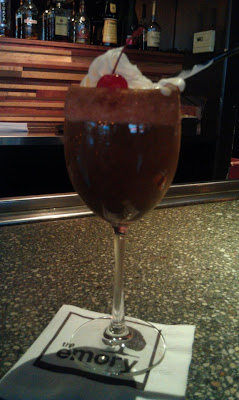 #3 The Emory (Ferndale)
They're not really known for their Spanish coffee, but they should be. Known best as a beer and burger bar (REALLY good beer and REALLY good burgers, and a build your own Bloody Mary bar on Sundays), their Spanish coffee is a local best kept secret. But if you're hanging out there one day and you see a blue flame and sparks emanating from behind the bar, that's their Spanish coffee - they light the brandy on fire and then spark it with cinnamon. Topped with rich whipped cream and a maraschino cherry, you totally won't feel like a wuss for ordering this because (a) fire, and (b) hipster bar. (Probably it's ironic?)

#4 Torino Espresso Bar (Ferndale)
Their Spanish coffee recipe is modeled after Tom's, right down to the orange twist, though it feels like it makes more sense here being that this is a cocktail bar with an emphasis on coffee and not a seafood house with an emphasis on oysters.

#5 Bacco Ristorante (Southfield)
Italian, Spanish, whatevs, there are no boundaries here. At Bacco you get a bowl of Spanish coffee to enjoy on its own (it's enough) or with one of their house-made pastries or gelato.