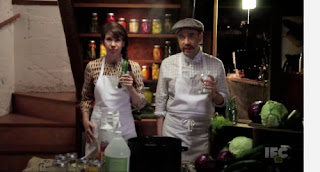 Treat Dreams's "Michigan Salad" ice cream flavor was named one of the "Fifteen Funkiest Ice Cream Flavors on Earth" by Time Magazine. And it's in some interesting company - foie gras and bone marrow with smoked cherries also made the cut. To celebrate, Treat Dreams will be featuring this flavor June 2-15. [Time]

And here is a story from CNN Money about Treat Dreams owner Scott Moloney, who left a career in banking to make ice cream, reminding us that sometimes making crazy decisions and taking a (huge) leap can pay off. [CNN Money]

The building that is home to Jacoby's German Biergarten is up for sale, though that doesn't mean it's closing. [Crain's]

In case you missed it: Burger furor. [EID]

Join me on June 29 with The Detroit Bus Company! [Det Bus Co]

Hot sauce. It's going to be the next pickle. I'm telling you. Hell, even the picklers at the Brinery are getting into the hot sauce game with their new pickled hot sauce, now available wherever the Brinery products are! [Brinery FB]

The Detroit News spilled a couple of details about the two new restaurants that Curbed Detroit has been reporting on for ages now, or at least as long as the GAR has been under renovation. Which has sort of felt like ages, but restoring a castle takes time. [Curbed / Det News]

Herd shares (or "cow shares") are now legally recognized and allowed to operate unregulated in Michigan. Drink all the raw milk you want without the guv'ment butting in on your decision. [Farm to Consumer]

JBaldwins Restaurant-Catering was heavily damaged by a fire last week, though no one was injured. Owners Jeff and Rose Baldwin plan on rebuilding and hope to reopen by the end of summer. [Detroit News]

Baltimore media is doing a really great job covering Dangerously Delicious Pies Baked in Detroit's Rodney Henry's appearance on Next Food Network Star. Detroit is kind of dropping the ball with this one. We can partially claim him too, you know. [Baltimore Guide]

In Detroit, we take the Life Aquatic very seriously. Marinas are remaking themselves into floating resorts. [Detroit News]

Apparently Michigan's wine industry lobbying group is still better at their job than that of the craft brewers, but at least now we can drink wine at farmers markets despite protests from "opponents," who happen to make a lot of money from Michigan's strict distribution laws and thus stand to lose money at even the slightest relaxation of them, claiming it will lead to increased alcohol abuse because FOR YOUR SAFETY and also LESS MONEY IN THEIR FAT FAT POCKETS. [Detroit News]

West Coast is the best coast! Here's more love for Traverse City and beyond. [Freep]

Michigan DOMINATES this list of the best summer beers with Bell's Brewery, Founders Brewing Co., Arcadia Ales and New Holland Brewing Co. all in the top 10, leaving only 6 spots left for the rest of the country. Let's hear it for the Great Beer State! [Fat Wallet]