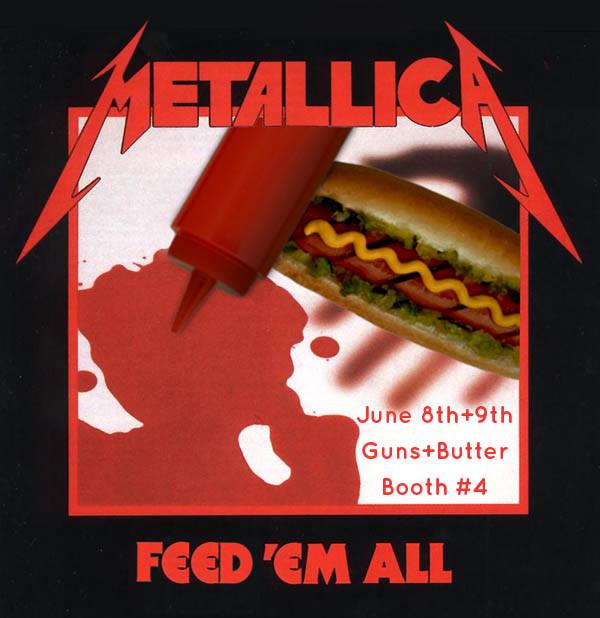 In honor of Metallica being in town this weekend (METALLICA RULZ), and the longhairs who have flocked into town to see them, we're taking a look at Detroit's most metal meals. What makes a meal metal? Well, first, meat. Meat is metal. MEATallica. Really anything that's hardcore is metal. So, like, anything super-spicey is metal (but only if it has a cool name). BBQ is metal, because it is meat, and because it is southern, and the south is super-metal. And anything else reminiscent of head-banging and hangovers and motorcycles and Black Tooth Grins and blood and sweat and METAL is fucking metal.

Straying from the usual top 5 format here because making your own rules (even on a website where you already make all the rules) is also fucking metal.

#1 Guns + Butter Feed 'Em All
Did you miss out on the pop-up at Ponyride? Fuck it, that crowd was totally not metal anyway. Guns + Butter (metal and metal) will be at Orion all weekend serving "Eggs + Bacon," not quite the same Eggs + Bacon Vol. 2 from the Ponyride pop-up you saw Instagramed a thousand times by everyone in Detroit last month for those of you who live in Detroit and follow all of its people on Instagram, but a mighty fine one just the same. This one is made with fried egg and bacon hollandaise. Not only is Guns + Butter the best thing about economics, but it is also one of the coolest (and therefore most metal) things happening in Detroit right now.

#2 Slows BAR BQ Corktown, Feed 'Em All
For two reasons. Actually three. The first: because co-owner Phil Cooley curated all the food for your face at Orion Music + More so he knows what's up. The second: because they have a dessert called the Chuck Norris, and it will kick you in the face. Third, and there's a reason I waited to put this one last -- the Triple Threat. Applewood bacon, pulled pork and ham make for a pork orgy, a porgy if you will, and and AND, it will be available at the Feed 'Em All food court at Orion on a stick. That's right. Take something awesome, then put it on a stick. This version has ham, confit bacon and smoked pork butt ... ON A STICK. Metal.

#3 Green Dot Stables Corktown
There's not much you can write on a menu that is more metal than calling something "mystery meat." Green Dot Stables is best known for their cheap gourmet sliders and their cheap craft beer, but one important thing to mention is their weekly mystery meat special ... which sometimes is pretty tame (sometimes it's not even meat at all), but other times is camel, or lamb's neck, or bull testicles. This week all you headbangers are in luck 'cuz the meat of the week is wild boar, and wild boar is fucking delicious, and also one of the most metal of the animals in the edible kingdom. Also metal is the $5 Buffalo Trace pours. That's more fancy metal, mind you - to be really metal it would have to be Jack, and only Jack - but is it un-metal to enjoy a good deal on a fine beverage? No it is not.

#4 Las Cazuelas Grill Southwest Detroit
First of all, eating gas station food is totally metal. Pick up some smokes and a torta to go while you gas up the hog? Metal. Las Cazuelas Grill, located inside a BP station, has a full menu of Mexican items including tacos, burritos, tortas and more. Plus, you know, there's a huge metal scene in Texas and in Mexico City, so the cuisine already lends itself well to the music (and vice versa). I mean, Robert Trujillo and Chino Moreno and both of Mexican descent. So, you know: metal.

#5 Foran's Grand Trunk Pub Downtown
Because you need a good basecoat for all that face-melting metal later in your day, start with brunch at Foran's Grand Trunk Pub. I'll save you some time: order the Hillbilly Benedict. Sausage, poached egg and cheese on an English muffin smothered in homemade sausage gravy. Order that with some breakfast shots (taste like pancakes! made with whiskey!) to start you day off the metal way. Because breakfast shots are fucking metal.

#6 Union Street Saloon Midtown
"Saloon" sounds totally metal, but what's most metal about this place is a little something called rasta sauce. And it is HOT. Like HOLYUNHOLYPEPPER hot. Get it on straight-up wings, or order the Dragon Eggs: chicken breast stuffed with gorgonzola cheese, battered and tossed in rasta hot sauce. Dragons are totally metal. 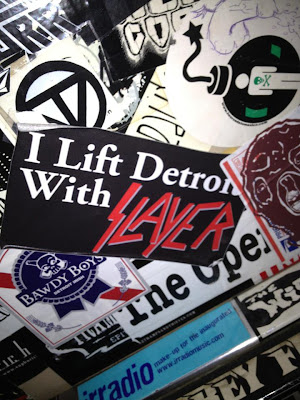 #7 Paradillas Patagonia Southwest Detroit
Flank steak and not a whole lot of English, this place strays from the usual Mexican fare of Mexicantown in favor of Argentinean-style STEAK (and in South American-sized portions). Please enjoy your very metal mound of meat.

#9 Bucharest Grill Downtown
I'd be remiss if I didn't mention the death by garlic shawarma at Bucharest Grill, one of Detroit's most famous sandwiches (if more on a local level than a national one). Their hot dogs are also mighty metal; try the 1920 Red Hot, a spicy old school hot dog served with grainy mustard.

#10 + 11 Lafayette + American Coney Island(s) Downtown
Why? Because you have to be fucking metal as hell to ingest this shit, especially at the ungodly hour most people go there.
Posted by Unknown
Email ThisBlogThis!Share to TwitterShare to FacebookShare to Pinterest