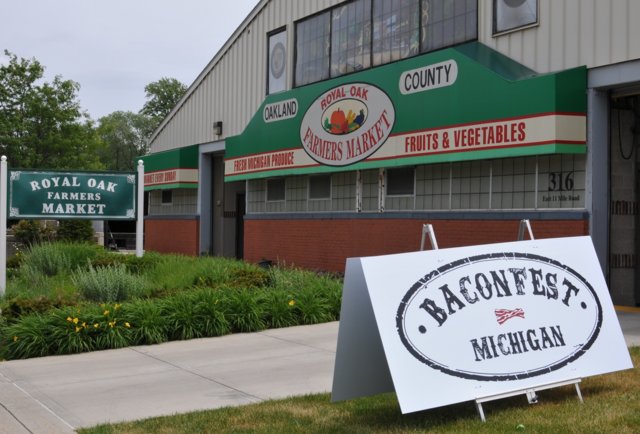 Last year’s sold-out smash hit Baconfest Michigan returns on Saturday, June 1, 2013 from 7 to 11 p.m. at the Royal Oak Farmers Market, and we only have two words for you: MORE BACON!

What started as just a spark in the eyes of two serious lovers of salted and smoked pork has turned into a full-blown phenomenon. It probably goes without saying, but it turns out people really like bacon. “Baconfest 2012 was an overwhelming success for us and our participating restaurants,” says festival co-producer Matthew Peach. “This year will have more restaurants, increased space to accommodate more guests, two musical acts and even more Michigan based products. Which all means more bacon goodness here in the Great Bacon State!”

In 2012 Baconfest brought together some of the top restaurants in metro Detroit – including the Rattlesnake, Green Dot Stables, Forest Grill, Café Muse, Toasted Oak, One-Eyed Betty’s and Grange – as well as popular local breweries Kuhnhenn, Dragonmead, Jolly Pumpkin and North Peak for a sold-out crowd of 1,400, and these places brought their bAcon-game. We had a huge variety of bacon-infused dishes from 37 different restaurants, even places that butcher and smoke their own, and were the first Baconfest in the country to also have vegan bacon (from Seva in Detroit). We were floored (and so were you based on how you all waddled out of there), and now we can’t wait to do it again!

This year some 2,000 people with a passion for pork will come together at the Royal Oak Farmers Market for Baconfest Michigan 2013. We’re adding more space and more restaurants this year, which means – you guessed it – more bacon! Baconfest will continue to bring together the very best of all things bacon – inventive dishes and drinks with bacon as the theme as well as official merchandise and demonstrations from some of metro Detroit’s most bacon-loving chefs!

There will also be live music from Detroit favorites the Gia Warner Acoustic Trio and the Reefermen during the event and a competition between the restaurants for “Best of Fest,” selected by our secret panel of judges, and a “People’s Choice” fan favorite! (Winners will receive a framed certificate and supreme bragging rights for a whole year.)

Official sponsors of Baconfest Michigan 2013 and participating restaurants are still being finalized. Follow Baconfest Michigan on Facebook at www.facebook.com/baconfestmichigan and on Twitter @baconfestmi for updates. Also keep an eye out for Baconfest Traverse City, coming this fall!
Posted by Unknown
Email ThisBlogThis!Share to TwitterShare to FacebookShare to Pinterest