The newly-opened Two James Spirits in Corktown is the first licensed distillery in the city of Detroit since before Prohibition (it won't be alone in that sandbox for long though; Detroit City Distillery will open in Eastern Market sometime in 2014).

The distillery was founded by Peter Bailey and David Landrum; third partner Andy Mohr came on board later. They purchased a large industrial building on Michigan Avenue on the other side of Roosevelt Park from Slows et.al. last July. Renovations on the 7,000-square-foot building, which was previously a taxi cab storage and dispatch center and originally a doughnut manufacturing plant when it was built at the turn of the century, took a full year to complete.

But the work is done, and Two James is already welcoming their first customers in a super soft opening, allowing them to get their feet wet as you wet your whistle, as it were.


The space is a production facility for their Two James label spirits, which includes 28 Island Vodka, named for the 28 islands (some now underwater) in the Detroit River which were used as hideouts during Prohibition; Old Cockney Gin, a London-style dry gin created to honor Bailey's father, a Brit; and Grass Widow Bourbon, named after an old whiskey brand once manufactured in Detroit, which was once a leader in premium whiskey manufacturing. There is also a 100% rye whiskey, another bourbon, and a reserve single malt whiskey (these all need to age in barrels and won't be released for at least a year). Future plans also include Two James Calvados and Two James Absinthe. They try to use as many local products as possible; the rye for the 100% rye whiskey all came from a farm in Jasper, Michigan, and they also plan on making some eaux di vies with local fruits in the future (like an apple brandy). 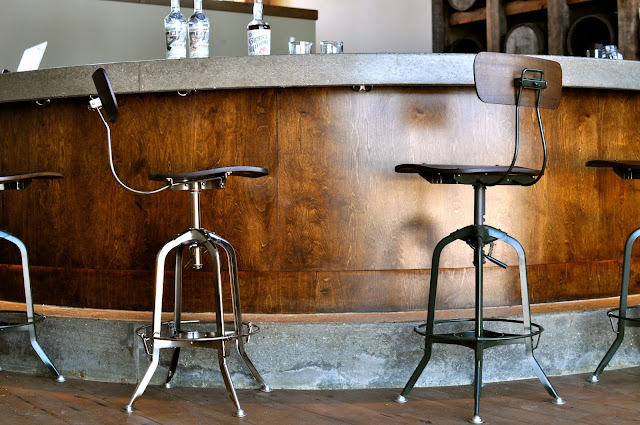 Bailey and Landrum took a distilling class together in Chicago. After long considering opening his own restaurant, it became more and more clear to Landrum - who was already really into craft cocktails and was already making his own bitters and cocktail recipes at Cafe Felix in Ann Arbor - that it was possible to make a really high-quality product locally and have a sustainable business. The two forged a business partnership and after considering different parts of the country for the distillery, eventually decided that Detroit city is the place to be. Mohr says local businesses like Slows and Sugar House have been exceedingly supportive.

Two James is named after the founding partners' fathers, both deceased (and both named James). The name is their tribute to the values of hard work and the importance of family instilled in them by their fathers. 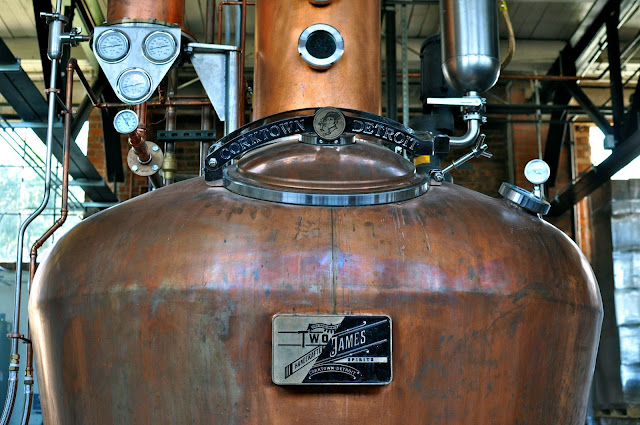 Two James products are available for purchase in their tasting room and are also now hitting the shelves of stores and local bars through their distributor Great Lakes Wine and Spirits. Distribution will start in Michigan and eventually expand out to the Midwest and East Coast with hopes of breaking into international markets. Their 500-gallon copper still can produce a lot of booze; for their first year of production they are looking at 2,500-5,000 cases and can grow from there.

The quality of their products doesn't just stop at what's inside the bottle: the bottles themselves are works of art. The packaging for their vodka and gin was designed by New York-based Stranger + Stranger, which specializes in packaging design for wine, spirits, and beer. The bottles feature the words "Corktown" molded into the base of the bottle and "Two James Spirits" on top, a coin with the Two James branding fused into the bottle, and exquisitely detailed labels modeled after pre-Prohibition marketing pieces. This packaging without a doubt has a few design awards in its future. 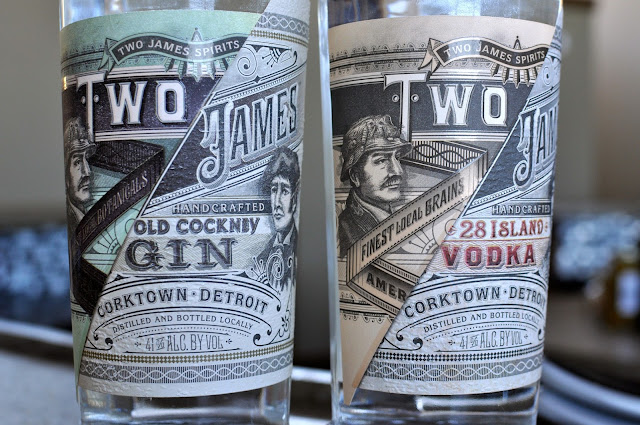 That attention to detail and quality of design work has also been carried into the tasting room. Architect Piotr Kolacz designed the space. Bricks are either original to the building or reclaimed from other historic buildings. The original steel beam overhead was simply repainted, and the garage door in front was replaced with a glass one. Wood for the floors and benches came from Reclaim Detroit. A massive circular concrete bar designed by Kolacz was framed and poured on-site: this thing, all one piece, will NEVER leave this building. It will be one of the only things left standing after humanity blows itself up and all that's left is rubble, cockroaches, and this bar. 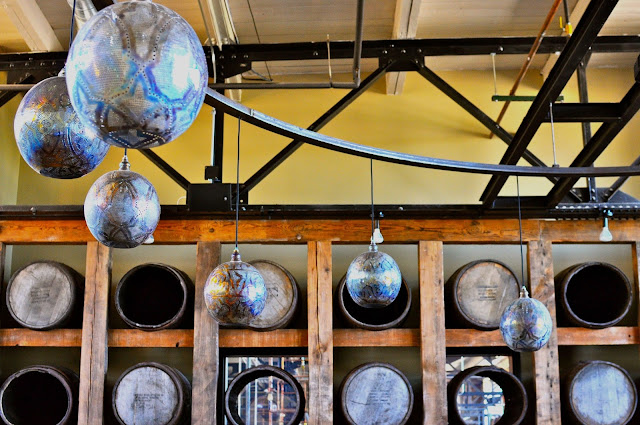 Overhead is a circular steel ring with metal globes hanging from it. The globes came from a bazaar in Egypt that Kolacz came across while traveling; the welding of the steel ring and the decidedly steampunk Two James sign out front was done by metalworker Taru Lahti. Inside they will also hang works from local artists for sale (100% of sales go to the artist) and they also have a projection which can only mean one thing: movie nights! 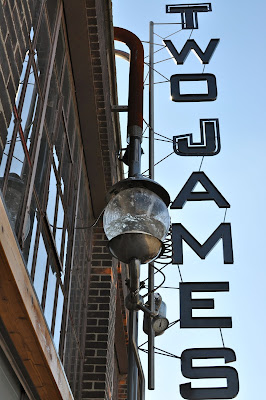 Two James is now open for limited hours with a limited cocktail menu featuring their spirits. Landrum is currently out of the business (his wife just had a baby), so look for the grand opening in the next month with regular hours and a more extensive cocktail menu with fresh ingredients from Eastern Market and and house-made items like vodka infusions with yellow raisins and Afghan figs. Hours will be Thursday, Friday and Saturday evenings to start as they gauge demand.

An unofficial opening last month with the Oily Souls Motorcycle Club showed them that demand could in fact be quite high - about 1,000 people came out, many in no way affiliated with the bike club but came only because they saw something was happening over at the new distillery. Next spring the back lot, now covered in gravel, will be transformed into a patio and event space with the dramatic Michigan Central Station as its backdrop.