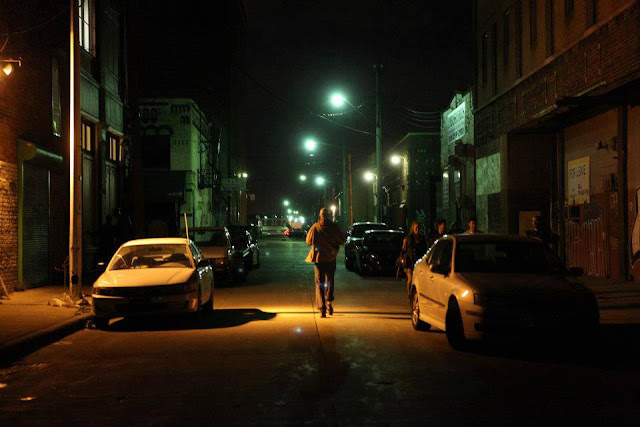 If you've been on the scene for awhile, it should come as no surprise to you to hear that Eastern Market can be just as lively at night as it is during the day. (And sometimes much more so, if the day we're talking about is any other one but Saturday.) This has meant different things over the years. Now it means dozens of art and design studios, galleries, restaurants, and various other kinds of creative spaces.

The third-annual Detroit Design Festival is now in full swing and tonight is one of the DDF's signature events, Eastern Market After Dark.

EMAD started with last year's DDF after Nina Marcus-Kurlonko, Project Manager for the Red Bull House of Art, was driving through the market district at night. "I saw a bunch of lights on that you don't normally see on; people were all in their studios working," she says. "People have this association with Eastern Market and the food. I thought, there has to be a way for people to see this culture here. People are always creating and building things in the neighborhood."

Eastern Market is home to dozens of designers and artists who have studio spaces in the market district and also call it their home. There are also galleries like the Red Bull House of Art, the more recently-opened Inner State Gallery (home of 1xRUN), the gallery-café-performance space and soon to be museum Trinosophes, the hacker/makerspace OmniCorp, Division Street Boutique and Aptemal Clothing (of "Detroit Hustles Harder" fame), not one but two vintage letterpress studios, Signal-Return and Salt + Cedar, the hard to define but necessary to explore Detroit Mercantile Co., and so many other independently-owned businesses that blend artspace and design studio with retail commerce. (And food. There's always food.)

Nina sent out an email to some folks, who sent an email out to more folks, and by the time the first Eastern Market After Dark was held last year during the 2012 Detroit Design Festival, she had 25 places signed up to open up their spaces for behind-the-scenes tours and artist walkthroughs to the 2,000 people who showed up.

In addition to walking through all the studios and artists' workshops the public might not otherwise have access to, there is also a ton of programming to go along with Eastern Market After Dark. An artist will be making an installation piece at Inner State Gallery from their 1xRUN paper scraps. Detroit Collision Works' First Container will have storytelling boxes at several venues. OmniCorp's makers will be showing off their skills. (This might involve some sort of fire; one never knows.) Odu, the 14-piece Afrobeat orchestra led by composer, musician and artist Adeboye Adegbenro and consisting of some of Detroit's finest musicians including Baba Akunda, Jennie Knaggs, and Joel Peterson, will be playing at Trinosophes at 9 p.m. for $5. Aptemal will have screenprinting demos at the Division Street Boutique. Detroit artist and musician Ron Zakrin, whose studio space is in Eastern Market, will play a show at the Red Bull House of Art.

And, as for the food: the American Institute of Architects Detroit chapter is hosting an awards celebration in Shed 3 from 7:00 p.m. to 11:30 p.m. From 7-9 p.m., ticket-holders will have food from Detroit restaurants including Rubbed and cocktails from Bailout Productions. (Tickets are only $35 and are available at the door, and yes, they accept credit.) Salt + Cedar is releasing a new Detroit-themed poster and also serving "Bunny Chow," the savory street food of Cape Town. Eastern Market is also launching their third Thursday night market in Shed 4, which includes a temporary installation project, a "chandelier" made from found objects from all over the city. Third Thursday night markets will have more of an artisan and craft focus, though given the nature of tonight's event, this one will also have food. Need more food? Preview two new restaurants that aren't even open yet: Frontera and Guns + Butter (GASP, you mean Guns + Butter is opening a permanent space in Eastern Market? Yes Marge, they are), plus others like Trinosophes, Cutter's, Roma Café, Supino Pizzeria, and more.

For the full list of venues and events, check the events page here. And here's more info on the AIA celebration too. There will also be plenty of music, which kind of goes without saying. "Everyone in this neighborhood has this really fun energy," Nina says. If you've never experienced the energy of Eastern Market after dark for yourself, tonight's the night to go.

Twitter/Instagram/Facebook the shit out of this event with these hashtags: #EMafterdark #DDF2013
Posted by Unknown
Email ThisBlogThis!Share to TwitterShare to FacebookShare to Pinterest