It could easily be said that the best-designed public spaces in Detroit right now are the new breed of coffeehouses that keep popping up. From the citrus-soaked modernism of Urban Bean Co. that looks like it could have been plucked straight out of the pages of Dwell (in fact, and this surely is no coincidence, issues of Dwell are displayed on a magazine rack – "displayed" really being the best word to describe it), to the west coast aesthetic of Astro Coffee (which looks like pretty much every uber-trendy coffeehouse in San Francisco, Santa Cruz and L.A. but with a distinctly Detroit flair) and the modern rustic design of Great Lakes Coffee Roasting Co. in Midtown, coffee houses are no longer the shabby chic student flopping grounds of the '90s but the aesthetically-appealing refuge of the design-obsessed MacBook set. As the coffee has gone from thoughtless drip to compulsively mindful pour-over, so too have the spaces been made over. Stella Good Coffee inside the Fisher Building is the latest example.

Stella Good Coffee, previously known as Stella International Café, closed last fall and is reopening today after going through a redesign that could easily qualify for a segment on Extreme Makeover: Coffeehouse Edition. Kevin Borsay and Shawn Santo, founders and owners of Pure Detroit, the Rowland Café, and both Stella Cafés (there is another location inside the Guardian Building), oversaw all of the work themselves, along with James Willer of Reclaim Detroit, which works with a number of local Detroit nonprofits to deconstruct old, abandoned homes and repurpose the materials for new projects – both a sort of philosophical and literal honoring of Detroit's past while looking forward to the future. (Willer also did some work at Great Lakes.) 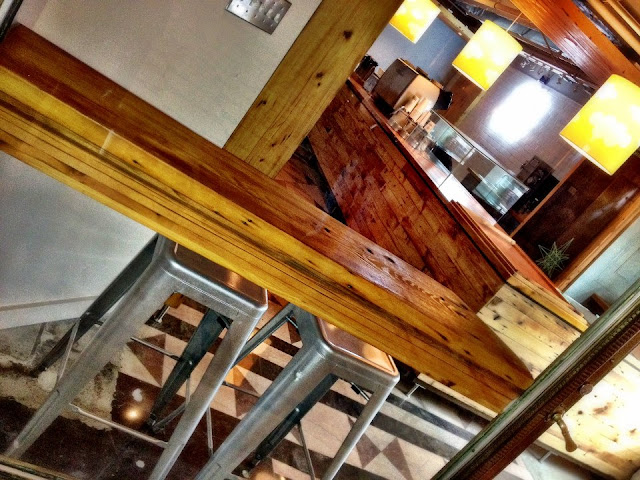 This café has been open since 2007, at a time when Detroit's coffee scene was a bit … well, sad. ("Underserved" is a nicer way of saying it.) Certainly long before Detroit became the new Seattle. But in the last several years the coffee culture has been ramped up significantly, and to stay in the game, Stella had to step it up. Borsay explains that the old Stella "didn't have the look and feel we wanted," and that a redesign was always part of the plan. Finally, the time was right.

After a complete gut down to the bare walls and floor, the new Stella is about as completely different as it could possibly be while still retaining the same name (and even that is only partial). Gorgeous century-old wood comprises the completely rebuilt counter, tables and ledges. The floor is the original floor from 1928, buried under layers of concrete. "I saw a picture of that historic floor and wondered if it was still under there," says Borsay. He chopped through all the layers on top of it and "sure enough, it was there." Part of the renovation work included grinding down to the original floor and polishing it up, but the manual labor was worth it: "Albert Kahn had a hand in this floor."

Through Reclaim Detroit, Willer helped Borsay and Santo source materials and, since he is also an architect, worked with them on the new design and the construction. "Without him we couldn't have done it." The wood came from 2644 Cadillac Boulevard on Detroit's east side. The house was disassembled brick by brick and, instead of throwing it in a landfill, remilled it and sold it to Stella. 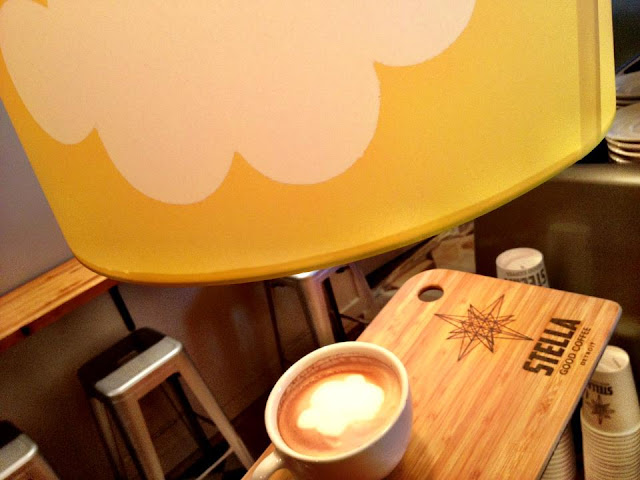 Willer explains that the wood from these historic old Detroit homes came from native Michigan forests. Michigan now only has about 5% of its original native forests left, which is all protected land. The only place you can get this original native lumber is from these old houses. Additionally, at the time these homes were built – the early 1900s – they used mostly old growth timber that was already 50+ years old. So the wood you see inside the new Stella Good Coffee is at least 150 years old. This Douglas fir is a completely different material than what you could buy commercially, almost an exotic species that is available for a relatively low cost locally (through businesses like Reclaim Detroit, who had to establish their own mill and train people to work it because no other mills could work with these old materials).

Borsay says, "This is a good balance of maintaining the look of the building while also bringing a more modern look. This is beyond just an amenity to the building and a place to get coffee, but about a larger mission: creating vibrant, active Place 3 locations in the city." "Place 3" refers to the places where people socialize, with Place 1 being home, Place 2 being work, and Place 3 being everything else. "For us it's these really cool café environments where people meet and socialize. The more you have in the city, the more vibrant it becomes. That's our mission: to create these sorts of environments to make the city more vibrant. Rowland Café was our first foray into that."

The historic wood and floor are complemented by design elements that include custom-fabricated lampshades from Detroit Wallpaper Company featuring designs by local artists that will rotate regularly. "Instead of having art on the walls, we will have this shades done by different local artists." The happy yellow cloud design currently on display was done by local painter and musician Davin Brainard, an artist whose most recognizable work is probably the "Cloud Bridge" overpass in SW Detroit (though you've undoubtedly also seen his concert posters). The neon "Drink Good Coffee" sign on the back tile wall was fabricated by Spectrum Neon Sign Company, a Detroit business that has been around for over 30 years. "We're trying to use as many Detroit companies as we can," Borsay says. 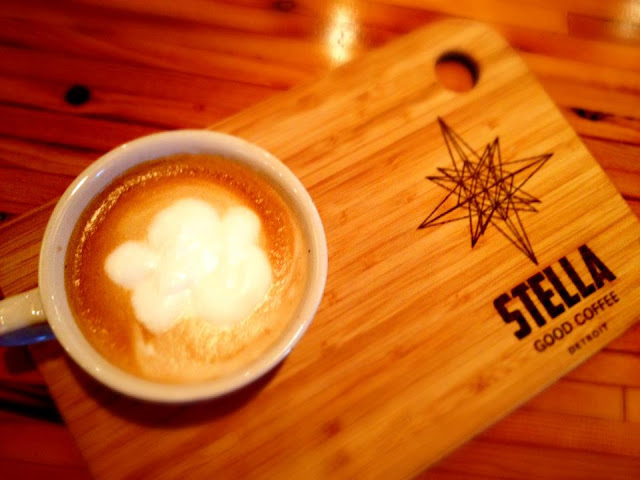 And that includes the items that they'll serve. They'll have a selection of soups from Russell Street Deli, baked good from Avalon Breads and Traffic Jam, plus a selection of high-quality juices and yogurts in the cooler. This year, to celebrate their seventh year, they are introducing a celebratory espresso called Stella Sonic, as well as some new craft micro lot, micro-roasted coffees which will rotate seasonally.

The new space also has more seating inside (with lots of additional seating in the Fisher lobby) and also offers free WiFi. But a new look also means a whole new identity: Stella International Café, so named because when they first opened they served all illy coffee from Italy and Panini sandwiches and had more of an "international" flavor, is now Stella Good Coffee. Over the years they have migrated more towards local producers and now serve their own coffees (roasted by Detroit's century-old Cadillac Coffee Company, with some additional micro blends from Populace Coffee in Bay City). They want this new iteration to be less grab-and-go and more about the coffee itself, reflected in the new name – and so they will serve only pour-over coffee made to order, certainly a much slower process but one much more in keeping with their own philosophies of slow food and slow design (which they joked about being the process by which the new design happened, only to find out it is an actual thing). 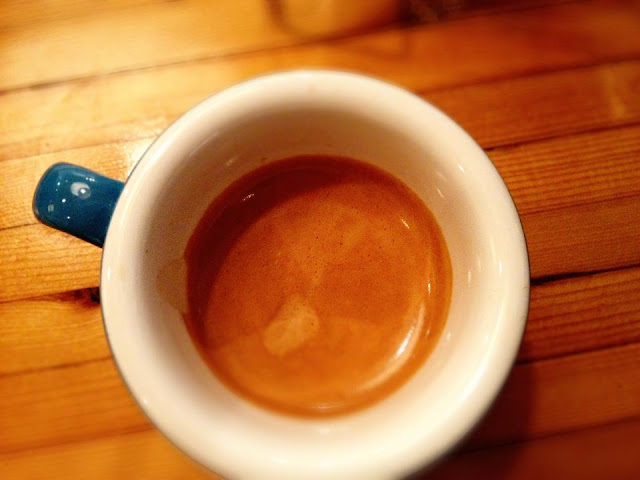 "In my architecture background, everything has to be about speed and is pre-planned," Willer says. "Compared to this where it was more an exploration of both our personalities and engaging local artists in the community. It was a slow evolution of the design." Borsay adds, "It took us awhile because we were building it all ourselves … [but with slow design] the quality at the end is actually better. It was almost like clay art; we were molding it as we [went] along."

Another new "slow" product they are excited to offer is their loose-leaf teas sourced directly from China.

But a new name also means a new logo, and this is something the math nerds, not just the design nerds, will enjoy: the new logo incorporates the Moravian star, also known as the Great Stellated (get it?) Rhombicuboctahedron (a complicated geometric form that is meant to represent a three-dimensional image and thus is asymmetrical when drawn flat).

The Stella location inside the Guardian Building will also undergo a similar renovation and rebranding in the coming months, though they won't be closing it as they did the Fisher Building location.

Stella Good Café is celebrating a soft opening starting today, with a grand opening coming later this spring when their lobby chairs arrive.